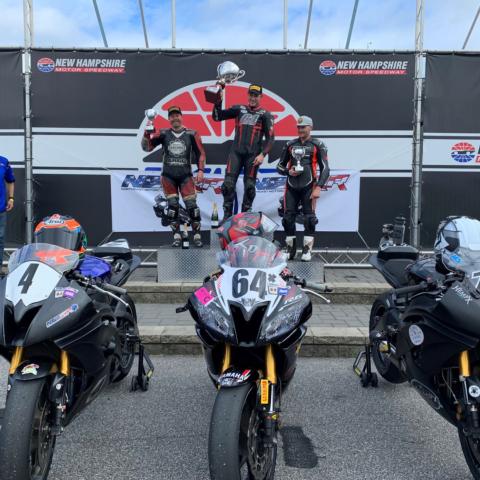 The 99th Annual Loudon Classic, the longest-running motorcycle race in America, capped off a successful Laconia Motorcycle Week with some of the most intense competition that the event has seen in years. Shane Narbonne of Tyngsboro, Mass. lived up to his title of “King of the Classic” as he became the first 10-time winner of the prestigious event.

The main challengers for Narbonne were four-time Classic winner Scott Greenwood of Dunbarton, N.H. and Tyler Sweeney of Derry, N.H. The crowd has anticipated the Greenwood-Narbonne battle, but Sweeney showed impressive speed as he challenged for the front after a multi-year hiatus from road racing.

Narbonne led early, but a small mistake allowed Greenwood to take the lead on lap six of the 20-lap feature. Narbonne recovered quickly and clawed his way back to Greenwood, probing several times as he searched for a way back to the front. With six laps remaining, Narbonne made his move on the brakes into turn one and then put his head down and set the fastest laps of the race. Greenwood never gave up, but in the end, Narbonne was able to extend his lead to just over one second to claim a hard-earned victory.

On the podium, Narbonne revealed challenges that he had on his path to victory.

“This was a tough one, because we blew our motor on Friday,” said Narbonne. “We had a bunch of people help us tear the engine down and really help to get us out for this race. We have such a great racing family here at the track, and I look forward to chasing title number eleven next year.”

Narbonne also recognized the efforts of his father, Al Narbonne, on this Father’s Day weekend for his many years of racing support.

The Loudon Classic is hosted by Northeast Motorcycle Road Racing, Inc. and was made possible in part by the support series title sponsor Mayhew Tools, a New England manufacturer of top-quality tools for professional technicians.

2023 will be the 100th running of both the Loudon Classic and the renowned Laconia Motorcycle Week. This landmark event will run from June 10-18 next summer and will be filled with special features to give motorcyclists of all ages the opportunity to be part of making motorcycle history.