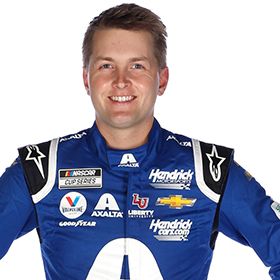 NASCAR Cup Series (NCS) driver William Byron will utilize the extra track time at New Hampshire Motor Speedway (NHMS) next weekend by competing in the Crayon 200 NASCAR Xfinity Series race prior to taking on “The Magic Mile” Sunday for the Ambetter 301 NCS race, where he’ll be fighting to earn his first Loudon the Lobster. Byron, who currently has an 11th-place best NCS finish at Loudon, recently spoke to NHMS in advance of New England’s only NASCAR weekend.

“Yeah, it’s been good. We’ve had good speed a lot of the races, we’ve just had some bad luck. The races that have been going well, we’ve seemed to do really well and win, so it’s been a good season. We’ve just gotta put it all together.”

Next weekend will be the debut of the NextGen car here at New Hampshire Motor Speedway. What can New England race fans expect to see from you on July 17?

“Well, I think this car likes the wider racetracks, and I think New Hampshire has multiple lanes to run in the corners, so it should help New Hampshire and have a little bit more of a wide of a racetrack. I’m looking forward to it. I’m running the Xfinity race there too, so I’m excited to get a lot of track time at New Hampshire.”

You’ve got four Cup Series starts here already with an average finish of 14.5. Your best finish, you achieved that in August 2020 with 11th place. What’s your plan coming in to next weekend how you can land in victory lane?

“Yeah, well, change the approach a little bit. It’s definitely not been the best track for me in the Cup Series, so trying to change the approach up and do the Xfinity race and try to get a bit better, and hopefully that translates to the Cup car when we get into that car on Saturday. I’m looking forward to it. New Hampshire’s always been one of my better tracks in the other series, so just gotta carry that over to the Cup Series hopefully.”

As a former Legend Car driver, what advice do you have for young drivers trying to make it to where you are today?

“Oh man, just keep working really hard. I think a lot of this sport is about talent, but talent takes you to a certain spot and then the work kind of takes over from there, so it’s about trying to work hard, study a lot and try to get better.”

What are some of your favorite New England stops when you come up to New Hampshire?

“I love the area. It’s very green, and the weather’s typically great, so I love the area. I would say sometimes I go golfing, and this time around, I probably won’t have much time to golf, but I’ll see if I can find some good restaurants around town.”