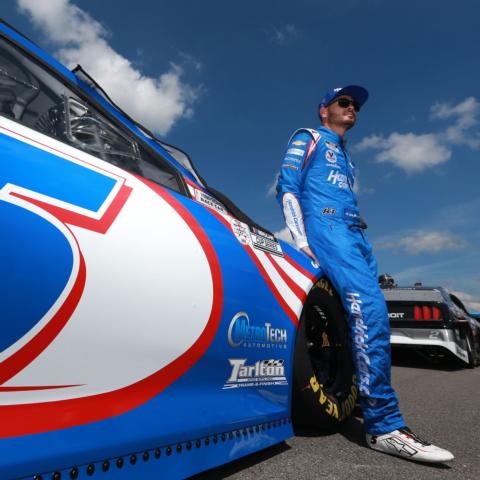 Kyle Larson has dominated the 2021 NASCAR Cup Series season so far, but will that dominance carry over to New Hampshire Motor Speedway, where he’s never won, for the Foxwoods Resort Casino 301 on July 18? Getty Images

NASCAR nation is geared up to descend upon New England this weekend for the Foxwoods Resort Casino 301 at New Hampshire Motor Speedway (NHMS), and with it, a multitude of captivating storylines that are sure to leave every race fan on the edge of their seats until the checkered flag falls.

Here are five must-watch storylines heading into this weekend’s action-packed showdown at “The Magic Mile:”

Hendrick’s Hot Shoe: Despite a flurry of NASCAR Cup Series (NCS) regulars claiming wins early in the season – 10 different drivers in the first 11 races – the summer stretch has belonged to Kyle Larson. Dubbed “Young Money,” Larson claimed three consecutive runner-up finishes in May (Darlington, Dover and Circuit of The Americas) before clicking off four consecutive wins (Charlotte, Sonoma, Texas and Nashville). In doing so, the Hendrick Motorsports standout has not only cemented himself as a 2021 championship favorite, but proven that he’s a threat on any style track. Larson will have his work cut out for him to keep that momentum going at the Foxwoods Resort Casino 301, where he’s never won and only led 16 laps in 10 career starts.

Happy Again?: Coming off of a career-best nine-win season last year, Kevin “Happy” Harvick and his Stewart-Haas Racing team haven’t been able to rekindle the magic in 2021, going winless so far this season. But if there’s anywhere the 45-year-old veteran can get things turned in the right direction, the Granite State just might be the place. In 37 career visits to the 1.058-mile track, Harvick has earned four wins in Cup Series competition, tying him for most all-time at the track with Jeff Burton. While he’s safely in contention to make the playoffs, a fifth NHMS victory would not only lock Harvick into the post season, but could be just the shot of confidence his team needs to make a run at his second Cup Series title.

Turf Wars: Four New England natives will be in the field battling for the win when the Foxwoods Resort Casino 301 goes green on Sunday. Joining New Jersey’s Martin Truex Jr., who considers NHMS his home track despite not being from New England, and fellow Connecticut natives Joey Logano and Ryan Preece this season is rookie of the year contender Anthony Alfredo. While all four drivers consider “The Magic Mile” their home track, only Logano has found his way to victory lane at NASCAR’s top level, winning a famed Loudon the Lobster in 2009. Truex Jr.’s seven top-five finishes in 27 starts at New Hampshire, combined with three wins already this season, suggest fans shouldn’t count him out if he’s in contention in the closing laps. And with a win in the Camping World Truck Series at Nashville earlier this year – his third victory across NASCAR’s top three series – Preece will be carrying a lot of confidence when the engines fire up on Sunday and could be a contender when the checkered flag falls.

Chasing a Championship: Fan-favorite and defending NASCAR Cup Series champion Chase Elliott is among the drivers looking to take home his first Foxwoods Resort Casino 301 trophy this weekend, but to do so, he’ll need to change his luck. In seven career starts at “The Magic Mile,” Elliott’s best finish in his Hendrick Motorsports No. 9 machine was fifth place in 2018. Despite starting on the second row last year and leading nine laps, the young driver ultimately fell to a ninth-place finish. To hoist the trophy at the end of the day, Elliott will have to hold off a bevy of talented drivers including Truex Jr., Ryan Blaney, Austin Dillon and all three of his Hendrick Motorsports teammates, all of whom are also seeking their first win on the 1.058-mile track.

Playoff Implications: As the NASCAR playoffs loom, the action is heating up around the cut line, with several big-name drivers fighting for their shot at the championship, but by no means safely in contention heading into the Foxwoods Resort Casino 301. Kevin Harvick, Austin Dillon and Tyler Reddick are all fighting to stay inside the top 16 while Chris Buescher, Matt DiBenedetto and Ross Chastain are on the outside looking in. Twelve different drivers have already won this season, clinching a playoff berth. A strong showing by any of the drivers on the bubble would certainly help their chances of racing for a championship, but a surprise winner on Sunday could shake up the bubble picture even more.

The excitement gets underway on Doubleheader Saturday, July 17 with practice and qualifying sessions scheduled for the NASCAR Whelen Modified Tour (NWMT). The green flag drops for the Whelen 100 NWMT race at 12:45 p.m. followed by the Ambetter Get Vaccinated 200 NASCAR Xfinity Series race at 3 p.m. The NCS Foxwoods Resort Casino 301 will run at 3 p.m. Sunday, July 18.