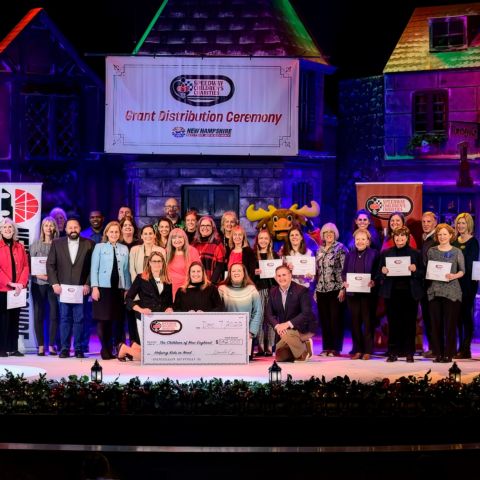 The holiday spirit filled The Palace Theatre in Manchester, N.H. Wednesday as Manchester Mayor Joyce Craig joined the New Hampshire Chapter of Speedway Children’s Charities (SCCNH), the official charity of New Hampshire Motor Speedway (NHMS), at its 13th annual Grant Distribution Ceremony. Grants were handed out to 27 local nonprofits totaling $142,000 in front of the festive backdrop from “A Christmas Carol.”

“The spirit of giving is what this season is all about,” said Craig as she addressed the grant recipients during the ceremony. “Thank you to everyone in attendance who works diligently to better the lives of children not only in Manchester, but across New Hampshire and New England. I’m grateful to be here with all of you to recognize the outstanding work you do.”

Since its inception in 2009, SCCNH has distributed more than $2.1 million, supporting more than 957,000 children throughout the region.

“Speedway Children’s Charities is a cornerstone of our company’s culture that we give back to the communities in which our speedways are located,” said New Hampshire Motor Speedway Executive Vice President and General Manager David McGrath. “To be able to work with so many wonderful organizations all over New England to help kids all across the region is such a wonderful feeling, and to do it during the holidays and the season of giving, it just feels really good.”

The grants distributed today resulted from fundraising opportunities and events that took place between November 2021 and October 2022 including Gift of Lights, three Laps for Charity events, a motorcycle Ride to the Racetrack from Laconia Harley-Davidson, a Cornhole Tournament presented by NBT Bank, Track Walk presented by PPG, Hot Laps, the Wicked Good Live Auction and the Dale Jr. Foundation Safe Kids 301. SCCNH also presented the opportunity for race fans to Sign the Track Wall Banner prior to the NASCAR Cup Series race and hosted the second annual 50/50 Raffle presented by PPG that grew to more than $87,000 during the speedway’s July NASCAR weekend.

SCCNH Chapter Director Danielle Cyr participated in a Half Ironman Timberman Triathlon event earlier this year to raise money for SCCNH. That, along with corporate donations from long-time SCCNH supporter PPG; Ambetter by NH Healthy Families, who supports Speedway Children’s Charities at not only NHMS but also many other Speedway Motorsports facilities; first-time SCCNH supporter NBT Bank and several donations from New England race fans enhanced the overall total for the year.

“Today is the special day each year when we get to spread holiday cheer to so many amazing New England organizations,” said Cyr, who also serves as New Hampshire Motor Speedway’s Director of Marketing. “We worked hard to provide lots of fun opportunities for race fans throughout the year to raise as much money as possible so these organizations can serve the needs of tens of thousands of children throughout the region.”

Fundraising for 2023 grants has already begun during the 12th annual Gift of Lights presented by Ambetter, open nightly through Jan. 1 at NHMS. A portion of the proceeds from Gift of Lights admissions, race registrations from the Yule Light Up The Night Run/Walk and s’more kit purchases will benefit SCCNH. The 2.5-mile drive-thru light show featuring 3.5 million LED lights, opens at 4:30 p.m. nightly, depending on the weather. Admission is available for purchase online for $35 per car or $60 per bus, limousine or RV. SCCNH has raised $388,335 from Gift of Lights since 2011.