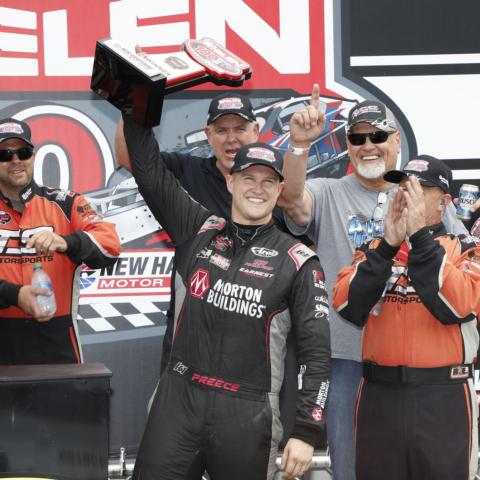 Thirty-one cars entered Whelen 100 at New Hampshire Motor Speedway (NHMS), but the opening showdown of Doubleheader Saturday came down to just three, with Ryan Preece holding off a wicked fast Justin Bonsignore and Ron Silk to earn his first-ever points win at his home track.

“I feel like I won Daytona,” Preece said. “If you’re from this area, this place means a lot to you. Coming here since I was a little kid, my grandfather and I used to camp right back there. Since I started racing the modifieds back in 2007, this has been that one track that has really alluded me… Really, really friggin’ happy to win this race.”

After swapping the lead throughout the white-knuckled 100-lap affair, a caution in the closing laps set up a thrilling overtime finish that saw Preece dive low into turn four to slingshot past Bonsignore and Silk to charge across the finish and capture the victory.  After 14 years of trying to win at his home track, Preece showed patience at the right time as Bonsignore and Silk charged into the final turns but their momentum carried them high and opened the door for the Berlin, Conn.-native to get past.

In addition to being his first points win at “The Magic Mile,” the Whelen 100 triumph marks the first victory of the season for Preece in the NWMT and his 23rd career victory.

Coming full circle from his early days camping at NHMS with his grandfather, Preece interrupted his victory lane celebration to sprint to the start/finish line and pull his wife from the grandstands to join the long-awaited festivities.

Doubleheader Saturday at NHMS continues with the Ambetter Get Vaccinated 200 NASCAR Xfinity Series donnybrook. Preece will look to cap an unforgettable weekend with another strong run in Sunday’s Foxwoods Resort Casino 301 when the NASCAR Cup Series takes to the 1.058-mile track. Green flag is scheduled for 3:18 p.m.

Tickets:
Log on to NHMS.com for tickets, schedules and more information on Sunday’s Foxwoods Resort Casino 301. Tickets start at just $59 for adults and $10 for kids 12 and under.