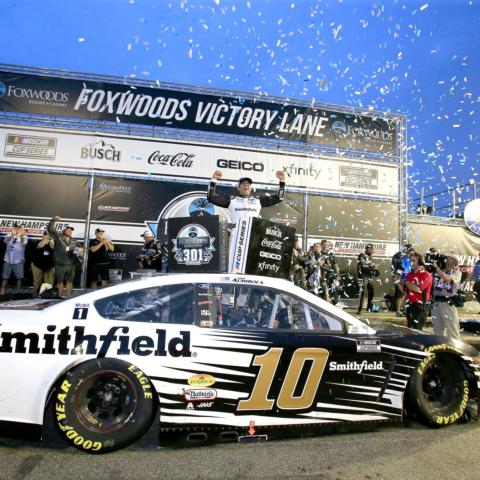 Aric Almirola celebrates not only winning New Hampshire Motor Speedway's 50th NASCAR Cup Series race, the Foxwoods Resort Casino 301, but also his first win of the 2021 season, which locked him in to the playoffs on Sunday. Harold Hinson Photography

Aric Almirola raced Mother Nature, daylight and the NASCAR Cup Series (NCS) field to claim his first win since 2018 in a wild Foxwoods Resort Casino 301 at New Hampshire Motor Speedway (NHMS) and a berth in the 2021 NCS Playoffs.

“That’s what a race car driver lives for,” the 37-year-old Tampa, Fla. native said after the race. “For so long, I’ve been so close to winning at places like here, like Dover. We have been fighting, scratching, clawing. It feels so good to have that pay off.”

Following a red flag for rain that delayed the race for an hour and 41 minutes, Almirola powered his No. 10 machine from his 22nd place starting spot into the top five by the end of the second stage. In the final stage, Almirola battled past Brad Keselowski, Denny Hamlin and Kevin Harvick – who have combined for nine wins at “The Magic Mile” – to take the lead. After leading the final 20 laps, NASCAR officials called the race eight laps shy of its scheduled distance due to darkness.

“I didn’t know how many laps they cut us short, but when I saw the board and how many laps we had left, it stings,” Bell said. “If I was able to get to him, I think I had something for him. We were really good right there at the end of the race.”

The race, NHMS’s 50th Cup Series showdown, was marked by six cautions – including the red flag for rain – for a total of 47 laps.

The Foxwoods Resort Casino 301 trophy marks the third win of Almirola’s NCS career and the first not on a superspeedway. With the win – the first for Stewart-Haas Racing this season – Almirola earned a spot in the NASCAR Playoffs.

“This is by far one of my favorite racetracks,” Almirola said. “I know what I want out of the race car here. I know what to ask for in adjustments. Everything kind of lined up perfectly, we had a fast race car and we were – finally – able to capitalize on that.”

Prior to the win, Almirola was 27th in points. Unofficially, Tyler Reddick now sits in the 16th and final Playoff spot, with Austin Dillon just five points behind.