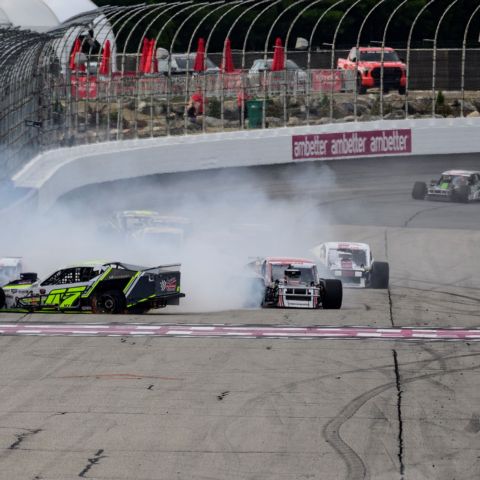 Anthony Nocella put the “magic” in “The Magic Mile” at Saturday’s Whelen Manufactured in America 100 to cap off a doubleheader of exhilarating action at New Hampshire Motor Speedway (NHMS).

For eight seasons, Nocella dreamed of winning on the NASCAR Whelen Modified Tour (NWMT). But in all of those years – 53 races in total – the 29-year-old never could have dreamed up the scenario that earned him his first career win.

Driving for his family-owned team, Nocella’s only previous start this season was a DNQ at Richmond. When the Massachusetts native’s No. 92 machine rounded turn four on the final lap Saturday, three cars stood between him and the checkered flag – Patrick Emerling, Eric Goodale and Kyle Bonsignore. As they approached the finish, Emerling and Goodale collided, sweeping up Bonsignore. Using every available inch of NHMS’s 65-foot wide frontstretch, Nocella avoided the calamity in front of him to beat Bonsignore to the line by a razor-thin 0.071-second margin. Emerling slid sideways across the line in third, followed by Goodale.

“We’ve been close to getting wins, and we’ve worked hard, but we haven’t gotten one,” Nocella said after the win. “I knew if I could stay in the top three or four I’d have a shot there at the end. I was either going to wreck or get the win. To get a win here, with the family car, it’s awesome.”

Next up for the famed 1.058-mile track is Sunday’s Ambetter 301. Pole sitter Martin Truex Jr. will lead the field to green after qualifying on the pole Saturday. Green flag is scheduled for 3:18 p.m.

Tickets:
Sunday’s Ambetter 301 tickets start at just $59 for adults and $10 for kids 12 and under. Fans can log on to NHMS.com for tickets and more information on this weekend’s lineup of action-packed racing. Walk-up tickets are available at all ticket booths.