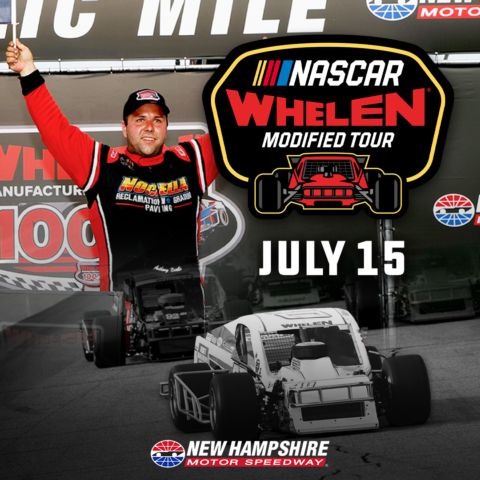 The New England fan-favorite NASCAR Whelen Modified Tour (NWMT) has been added to the lineup for New Hampshire Motor Speedway’s (NHMS) 2023 NASCAR weekend, July 15-16. The modifieds will join the NASCAR Xfinity Series (NXS) on Doubleheader Saturday, July 15 with a 100-lap race. The NASCAR Cup Series (NCS) will cap off the weekend with the Crayon 301 on Sunday, July 16.

“We’re thrilled to celebrate the 75th NASCAR Whelen Modified Tour race here at New Hampshire Motor Speedway in 2023,” said New Hampshire Motor Speedway Executive Vice President and General Manager David McGrath. “‘The Magic Mile’ is their biggest stage of the season, and as we saw this July, the modifieds produce some of the wildest action here at NHMS, always delivering a heart-pounding performance for New England race fans. Our NASCAR weekend wouldn’t be complete without them.”

Earlier this year, Massachusetts native Anthony Nocella avoided disaster and lifted his family-owned team to its first-ever NWMT victory in his eighth season behind the wheel. When he rounded turn four on the final lap, Patrick Emerling, Eric Goodale and Kyle Bonsignore stood between Nocella and the checkered flag. As they approached the finish, Emerling and Goodale collided, sweeping up Bonsignore. Using every available inch of NHMS’s 65-foot wide frontstretch, Nocella avoided the calamity in front of him to beat Bonsignore to the line by a razor-thin 0.071-second margin. Emerling slid sideways across the line in third, followed by Goodale.

Details regarding the full weekend schedule and broadcast information for NASCAR’s 2023 event at NHMS will be released at a later date.

Tickets:
Adult tickets start at just $49 for Sunday’s Crayon 301 NCS race and $35 for Doubleheader Saturday, featuring the NXS and NWMT. Tickets for kids 12 and under are just $10 for Sunday and free on Saturday. Further details can be found on the NHMS website or by calling 833-4LOUDON.