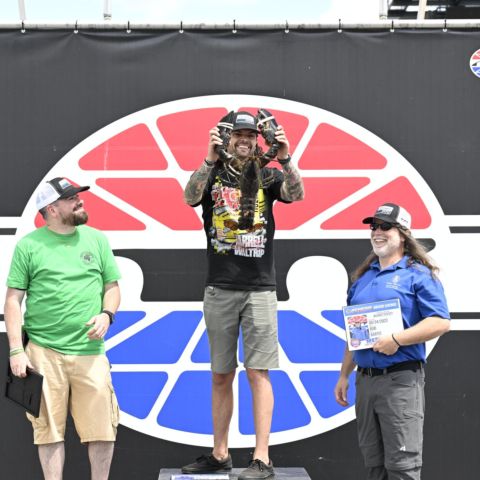 With New England’s only NASCAR weekend less than a month away, New Hampshire Motor Speedway (NHMS) hosted media on Friday for a little taste of what’s to come. Media members from across New England took part in the fifth annual Media Racing Challenge, and it was Kyle Belcher of The Circle Jerks Podcast out of Providence, R.I. who took home the win.

“This experience is something I’ll never forget,” said Belcher. “Twenty-four years ago, my father took me to my first-ever NASCAR race at NHMS, and ever since, I’ve been in love with the sport. Being invited to drive stock cars on that very same track was a dream come true. The entire NHMS staff and Rusty Wallace Racing Experience crew were welcoming, informative and overall fantastic. Being able to hoist the lobster in victory lane like my favorite driver Kevin Harvick did in 2018 and 2019 was the icing on the cake. I can’t wait to defend my trophy next year!”

The Media Racing Challenge winner was determined by the fastest lap time on the 1.058-mile track. Belcher was the fastest media member around the track at 39.241 seconds, while Timmy G (The Wicked Fast Podcast, 105.7 WROR-FM), Bob Bartis (WSMN 95.3 FM/1590 AM), Kevin Wiles Jr. (WHDH 7News) and Dan Walker (The Circle Jerks Podcast) rounded out the top five.

Belcher was honored with a traditional NHMS victory lane celebration, complete with a trophy, $100 gift card to Makris Lobster and Steak House and, of course, a live lobster, also provided by Makris Lobster and Steak House. Though a bit smaller than 20-pound Loudon the Lobster, who will be presented to the winner of the Ambetter 301 on July 17, the six-pound crustacean was hoisted high up into the air by Belcher.

NASCAR Xfinity Series (NXS) driver and Hudson, N.H. native Derek Griffith joined in the fun, providing tips to the media members from a driver’s perspective. Griffith will make his third NXS start on July 16 at the Crayon 200, marking his NASCAR debut at his hometrack of NHMS.

Not only did the participants get a taste of what it’s like being a race car driver, but they also got to sample some of the uniquely New England food items that will be available at NHMS concession stands July 15-17. They enjoyed lobster poutine, cheeseburger poutine, a frozen hot chocolate shake topped with fluff and even a whoopie pie cheeseburger, all crafted by the chefs of NHMS’s catering partner Levy.