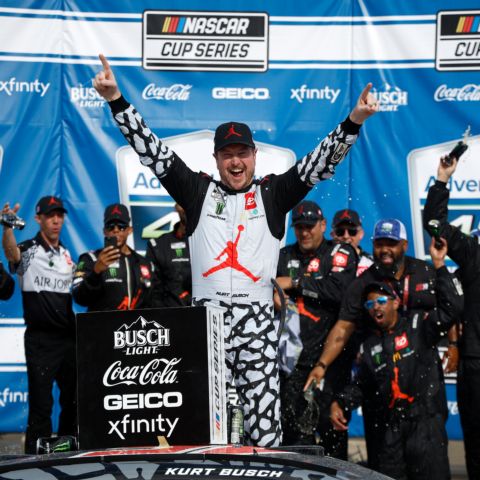 Kurt Busch, NASCAR Cup Series driver of the No. 45 Toyota Camry TRD for 23XI Racing locked in to the 2022 NASCAR Playoffs with his May 15 win at Kansas Speedway. Chris Graythen/Getty Images

With seven races remaining in the NASCAR Cup Series (NCS) season, Kurt Busch is comfortably in the Playoffs by virtue of a win at Kansas and a consistent season overall for his 23XI Racing team. Now, the three-time winner at New Hampshire Motor Speedway (NHMS) turns his attention to building momentum ahead of the post season, beginning with Sunday’s Ambetter 301.

This weekend marks Busch’s 39th start at “The Magic Mile,” where he has earned 15 top- 10s, eight top-fives and three wins on his career.

Despite his success at the 1.058-mile track, Busch said there are a lot of different challenges for drivers to overcome in order to make their way to victory lane.

“It’s mainly the corner entry and the braking zones at New Hampshire,” he said. “And then, turn three seems to get rougher and rougher each year, just with settling or track aging. It makes it a challenge to carve through there. If you get that right, that usually leads to a good day.”

Sunday’s Ambetter 301 marks the debut of NASCAR’s radically-redesigned NCS car at NHMS. Busch recognizes that, despite his past success at NASCAR’s only New England track, teams will be starting from scratch with their notes, which should provide plenty of action on the track as they race to adjust to the challenge of the NextGen car.

“As a race unfolds, there are so many challenges with this new car you’ve got to be ready to roll and be quick on your feet,” he said. “The NextGen car, it doesn’t like to be sideways. As soon as you step her out, she’s gone. The old car, you were rewarded with how far you could get her sideways because of the side force and the aero side. It’s a different feel, and it’s been a big challenge this year.”

“You’ve just got to stay consistent. You just have to run with the mindset of, ‘we’ve got to be a fifth-place car to put ourselves in position to win, but yet we can’t push too hard to be fifth.’ This car just has that razorblade edge.”

If Busch’s 23XI Racing team finds a way to ride that razor’s edge to victory lane on Sunday, he’ll join Kevin Harvick and Jeff Burton as the winningest NCS drivers in NHMS history. Perhaps more importantly in his eyes, Busch said a strong run at the Ambetter 301 would provide his team with crucial information ahead of the season finale at Phoenix, a similar style track that will ultimately decide this season’s NCS championship.