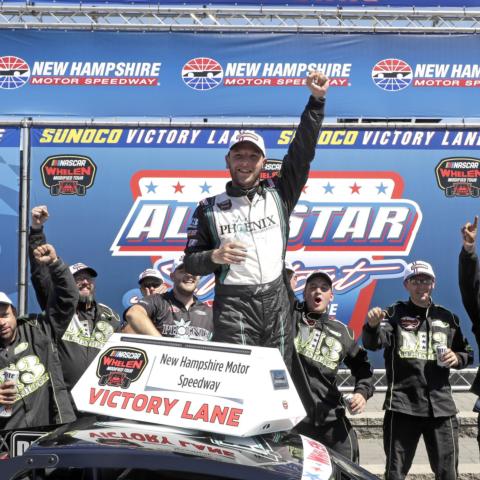 When Justin Bonsignore started racing go-karts in New York, he couldn’t have imagined in a million years that he would become one of the top drivers in the history of the NASCAR Whelen Modified Tour (NWMT) just 15 years later. Becoming a two-time NWMT champion in 2020, Bonsignore jumped inside the top-10 in the all-time wins list and won his second title in three years, continuing to build a rock-solid resume.

“As a kid growing up at Riverhead Raceway in New York, I never would have imagined I would even get a shot on the Modified Tour, never mind accomplishing everything we have in the last few years,” Bonsignore said. “What we have done as a team, it’s humbling. You don’t realize what you’re doing at the time, but when you look back later and let it all soak in, it’s special.”

Bonsignore began driving for his family-owned team and then made the move to the NWMT with Kenneth Massa Motorsports in 2010. Since then, he’s been competing with the Massa family on NASCAR’s oldest touring series. Bonsignore won his first tour race at Riverhead – his hometrack – in 2011. He followed it up with his second career win at Thompson in 2012. He started a string of success in 2014, winning three times and notching nine wins between the 2014-2016 seasons.

But it was in 2018 when Bonsignore’s career took off. Combining with Ryan Stone – a former JR Motorsports employee – as his new crew chief, Bonsignore won eight races en route to his title in 2018. He won six more races in 2019 and won three of nine events last year to capture his second crown. Bonsignore had 29 wins and 87 top-fives in his career entering the 2021 season.

“Ryan Stone, Ken Massa and everybody, top to bottom, it’s everything together,” Bonsignore said. “Ryan Stone just doesn’t let us fail. He works his guts out every single night at the shop.”

At New Hampshire Motor Speedway (NHMS), Bonsignore has only tasted success twice – once in the July 2016 points race and the other in the July 2018 non-points All Star Shootout. New Hampshire’s race weekend marks one of only three times the NWMT is at the same track as the NASCAR National Series (NASCAR Cup Series (NCS), NASCAR Xfinity Series (NXS) or NASCAR Camping World Truck Series) and the 100-lap race around “The Magic Mile” often produces thrilling finishes. Racing with restrictor plates is similar to what NASCAR fans are used to at Daytona or Talladega with tight packs and drafting down to the final few inches of the race. Multiple races in the last few years have come down to a last-lap pass. Bonsignore is hoping he’s the one in the right position on the last lap on July 17.

“That’s our big prestigious race of the year, no matter what event, that’s the one you circle each and every year,” said Bonsignore. “So much goes into that race and so much takes place during that race, you never know what’s going to happen. It makes all of the races that much more exciting. When you pull into victory lane there, you checked every box and had a strong day in all phases of the race. So much goes into being in position. I love going there and being on the big stage showcasing the NASCAR Whelen Modified Tour.”

Race weekend action gets underway on Doubleheader Saturday, July 17 with practice and qualifying sessions scheduled for the NWMT. The green flag drops for the Whelen 100 NWMT race at 12:45 p.m. followed by the Ambetter Get Vaccinated 200 NXS race at 3 p.m. The NCS Foxwoods Resort Casino 301 will run at 3 p.m. Sunday, July 18, marking the 50th NCS race at “The Magic Mile.”