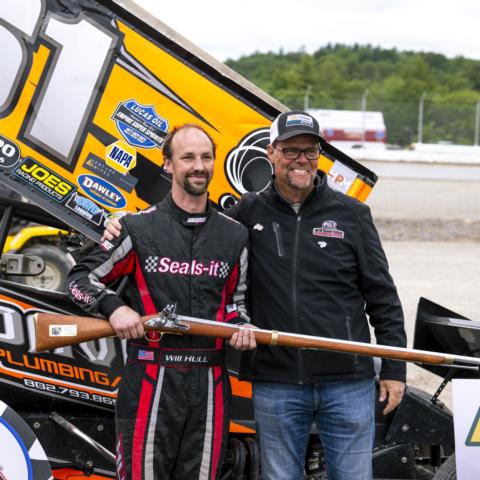 It may have been chilly, but the racing was hot at The Flat Track at New Hampshire Motor Speedway (NHMS) at the inaugural Musket Dirt Shootout. Sprint Cars of New England (SCoNE), the Dirt Midget Association (DMA) and Granite State Mini Sprints (GSMS) took on the 0.25-mile dirt oval Saturday to close out this year’s Motorcycle Week at NHMS.

Seventeen 360-winged sprint cars were on-hand for the caution-free SCoNE feature event. Will Hull took an early lead and never looked back. The field went three and four wide many times, and lapped traffic presented a challenge for Hull with Travis Billington and Chris Donnelly close behind with only a few laps remaining. Hull proved victorious, followed by Billington and Donnelly, taking home not only $1,500, but a musket trophy.

Daniel Piastka started from the pole and never gave up his position, landing in victory lane at Saturday’s DMA feature. The win marks Piastka’s first DMA win. Justin Sheridan, who started on the front row with his teammate, held on to second for most of the feature but ultimately finished third after Seth Carlson was able to make the pass late in the race.

Two classes of GSMS took to The Flat Track Saturday – 400/500cc and 600cc. Donnie Sharp Jr. was the first Musket Dirt Shootout winner of the day for the 400/500cc class, while David Bodio earned the win for the 600cc class. Both took home a musket to mark their victories.