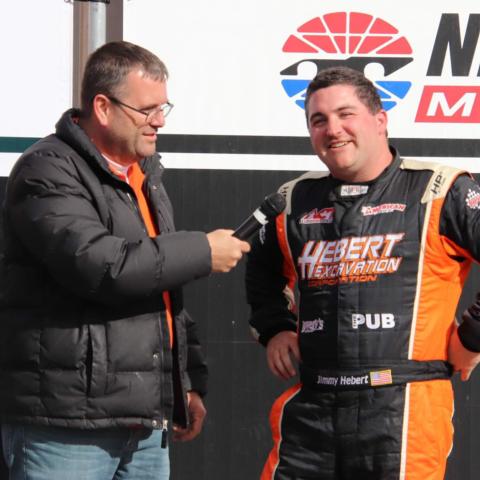 The now eight-time ACT Late Model Tour winner was leading the event with three laps to go before getting passed by Center Conway, N.H.’s D.J. Shaw. However, Shaw was later disqualified for a carburetor infraction. This gave Hebert the win and a $5,000 top prize on a busy afternoon at “The Magic Mile.”

East Bridgewater, Mass.'s Ryan Kuhn started on the pole and led the first four laps. Shaw then passed him from the fifth starting spot and drove away from the field. Hebert and New Salem, Mass.'s Tom Carey III followed Shaw around Kuhn, who was eventually felled by a brake problem. The duo could only watch Shaw drive into the afternoon sun until a competition caution on lap 27 for right-side tires and adjustments.

Shaw pulled away again after the restart until Jimmy Renfrew Jr. smacked the backstretch wall with 11 laps to go. The leader chose the inside for the restart, but Hebert made a charge on the outside, taking the top spot after two laps of side-by-side racing.

Hebert held the lead through one more caution on lap 43 for Dylan Payea’s stalled automobile. Shaw, though, had the faster long-run car and got below Hebert in turn three for the top spot with laps winding down. The joy was short-lived, however, and Hebert was named the victor in his first Late Model race driving a Ford.

In the Pro All Stars Series (PASS) Super Late Model National Championship event, Hallowell, Maine’s Johnny Clark got his first Magic Mile win after a 50-lap barnburner. Clark, the multi-time PASS champion and reigning Oxford 250 winner, first grabbed the lead from Turner, Maine’s Ben Rowe on lap eight. Clark paced the field until the caution flag on lap 24 for Zig Geno’s spin, which saw polesitter Brandon Barker get the jump on the restart.

After a competition caution on lap 30 for two fresh tires and adjustments, the action really heated up. The yellow came back out two circuits later for debris, and on this restart, Derek Griffith made a three-wide move entering turn to take over the point. In the process, 11-time NHMS winner Eddie MacDonald got shuffled out of second spot just as he looked ready to challenge for the victory.

Jeff White then spun on the backstretch with 12 laps to go for the fourth and final caution. This time, it was Griffith getting shuffled as Barker again leapt off the outside. Barker led the 39th circuit before Herman, Maine's Mike Hopkins – who’d started dead-last in the 25-car field – blew underneath him to pace lap 40.

Once again, Windham, Maine’s Barker found a way back to the front, going around Hopkins entering turn one the very next time around. Clark followed Barker and looked multiple times to his inside over the next six laps. With four laps to go, Clark got the run he needed off turn two. The veteran snatched the lead entering turn three and then slammed the door on Barker’s crossover attempt. Clark, Barker, Hopkins, and D.J. Shaw then ran under a blanket until the final lap, when Hopkins’ bid for second let Clark scoot away for the victory.

Although Hopkins came up short of second on the track, he inherited the spot in post-race technical inspection when Baker was disqualified for an engine infraction. Shaw became the new third-place finisher, giving him two podium finishes on the day. Jeremie Whorff, Ben Rowe, Dennis Spencer, Jake Matheson, Alex Labbe, Griffith and Rowland Robinson Jr. finished fourth through 10th.

Franklin, Mass.’s Bobby Santos III won at NHMS for the third straight time in a breathtaking 50-lap Tour-type Modified Open. Santos was running second to Harvard, Mass.’s Matt Swanson when the race’s only caution flew at lap 25 for teams to change right-side rubber.

On the restart, Swanson spun his tires and fell back. Santos assumed the lead, and the race transformed from a sedate affair to another Magic Mile classic.  Santos and early leader Mike Christopher Jr. double-swapped the lead on three straight laps, with Christopher taking the lead entering turn one and Santos pulling the crossover move in turn three. They pulled the same sequence on laps 33 and 34, and on the fifth “double-cross”, polesitter Chase Dowling stole second place from Christopher.

Dowling then flexed his muscle, passing by Santos to lead laps 35 and 36. The two then officially exchanged the lead five more times over the next six laps. Even then, there were double-swaps again on laps 46 and 47. Ronnie Williams followed Santos to the inside for second with three to go, and although Dowling was able to repass him, the sequence cost Dowling enough time that he couldn’t run Santos back down. All told, the 50-lap feature had 9 official lead changes plus 16 more unofficial lead changes.

Santos, Dowling and Williams were the top-three finishers in that order. Eric Goodale and Christopher rounded out the top five.

Contoocook, N.H.’s Emerson Cayer recovered from a stumble on a late-race restart to win the 20-lap North East Mini Stock Tour feature. Cayer was way out in front with five laps to go when Ray King pounded the sand barrel at the pit road entrance, drawing the race’s only caution and forcing a lengthy clean-up.

When the event when back green, Cayer was slow to get up to speed and fell to fourth. Defending NEMST champion Desmond Skilling eventually wrestled the lead away from Nick Anderson while Cayer tried to come back. Cayer would lose ground on the long straightaways, but make it all back and then some in the turns.

As the field took the white flag, Cayer was back up to second, and he went to the outside of Skillings in turns one and two. As they drag-raced down the backstretch, Berlin, N.H.’s Cody Leblanc dove inside three-wide. Skillings and Leblanc barely touched entering turn three, but it was enough for Cayer to scoot around the high side and take the victory.

Four cautions slowed the field in the first nine laps, including a yellow on lap seven after Ryan Waterman and Jordan Russell pounded the turn-one wall. The resulting delay to repair damage to said wall was the only thing that could slow Renfrew down. A tight battle developed for the second through fifth spots during the second half of the race, but Renfrew was long gone, winning by more than nine seconds.

After Ferreira held off a brief challenge from Warwick, R.I.’s Ryan Vanasse for second, his truck suddenly came to life. He swung underneath Boyle on lap three to retake the top spot, then pulled away down the stretch to win the caution-free event.

For technical information concerning all PASS divisions, and for media or marketing questions, please contact [email protected] or visit www.ProAllStarsSeries.com. Don't forget to "Like" the Pro All Stars Series on Facebook or follow on Twitter @PASSSLM14 to keep up with breaking news as it happens.