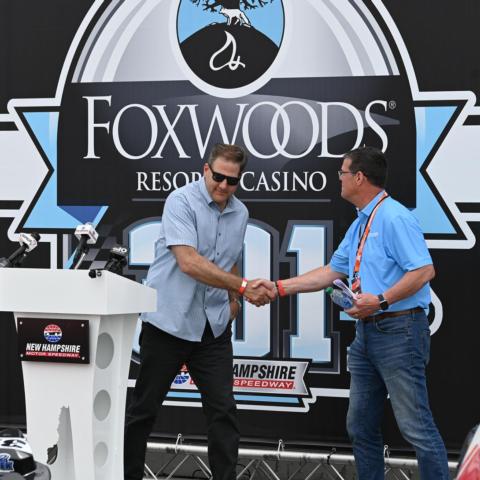 Governor Chris Sununu, Commissioner of the New Hampshire Department of Business and Economic Affairs Taylor Caswell and New Hampshire Motor Speedway (NHMS) Executive Vice President and General Manager David McGrath kicked off the summer season of racing and shared their excitement for bringing fans back to the 1.058-mile speedway in Friday afternoon at NHMS. Sununu, Caswell and McGrath also enjoyed hot laps around “The Magic Mile” in exotic cars from Xtreme Xperience.

Governor Chris Sununu
“It has been a very hard 62 weeks, but we’ve come through it with flying colors, and that’s because of partnerships, so a big thanks to David and his entire team. We just aren’t where we are without New Hampshire Motor Speedway being a big part of the pandemic playbook, as you say, and we put you on page seven of the playbook that we wrote. It says ‘Step five, call the speedway,’ because they’re always going to be there for us, they really are, it’s really phenomenal.”

Commissioner Taylor Caswell
“I just want to say thank you to David and the team here for everything they do here for our state. This is very truly a crown jewel of our experience in New Hampshire, not just for tourism sake, but for the sake of people who want to find that live and work experience and live on the east coast, find a great place to live, be near a NASCAR center point and all of the races that happen through the summer. I just want to say thank you for everything you guys have done. We’re very excited for the season this year. We’re looking at a record tourism season for New Hampshire, and the events that happen here are such a big part of that.”

David McGrath
“Today we are here to officially say ‘We are back!’ We are full capacity for our July 17-18 NASCAR weekend with the Foxwoods Resort Casino 301 as the headliner as the Cup Series returns to the Granite State and ‘The Magic Mile’ here at New Hampshire Motor Speedway.”

“Our business doesn’t run by itself. It requires a great coordination with the state of New Hampshire led by Governor Chris Sununu and making sure that we can get our speedway up and running for our major events.”

Through its diverse schedule of events, “The Magic Mile” annually hosts tens of thousands of fans from across the country and serves as a significant economic driver for the town of Loudon, state of New Hampshire and all of New England. NHMS is gearing up for an action-packed racing season that includes Motorcycle Week at NHMS June 12-20 featuring the 98th Annual Loudon Classic, the July 17-18 NASCAR race weekend highlighted by the NASCAR Cup Series (NCS) Foxwoods Resort Casino 301, plus the Granite State Legends Cars Road Course Series (RCS) and many other racing clubs, driving experiences and more throughout the summer.

Motorcycle Week at NHMS (June 12-20)
NHMS is a top destination for riders visiting the area during Laconia Motorcycle Week with on- and off-track events throughout the nine days of motorcycle mayhem. Racing bookends a week-long motorcycle celebration featuring vendors, demo rides from Laconia Harley-Davidson and more.

Supermoto East Coast will combine high-flying action on the dirt with high-speeds on the asphalt to wrap up Motorcycle Week at NHMS. Classes ranging from kids to adults will compete in round three of their championship June 19-20.

Doubleheader Saturday (July 17)
The NASCAR Xfinity Series (NXS) and NASCAR Whelen Modified Tour (NWMT) return to the July racing lineup to kick off NHMS’s NASCAR race weekend on Doubleheader Saturday. NASCAR’s rising stars will compete in the Lakes Region 200 and the New England fan-favorite modifieds are sure to put on an intense race at the Whelen 100. Adult tickets start at just $35 while kids 12 and under are free.

Foxwoods Resort Casino 301 (July 18)
The NCS will make its traditional mid-summer visit to “The Magic Mile” for the Foxwoods Resort Casino 301, which will mark the series’ 50th Loudon appearance. Will defending race winner Brad Keselowski land in victory lane again, or will Kevin Harvick earn the title of NHMS’s winningest NCS driver? Will Ryan Preece score his first NCS win at his hometrack, or will reigning NCS champion Chase Elliott win his first giant lobster? Adult tickets start at just $49 while kids 12 and under are just $10.

In addition to the on-track action, other traditional race weekend experiences for fans will return this year including camping, Fan Zone and entertainment.

Road Course Series (Multiple Events Throughout Season)
The Granite State Legends Cars RCS runs as a part of U.S. Legend Cars International. The 2021 schedule features 13 legend car races from April through September, including 10 races on the 1.6-mile full road course and three races on the 0.95-mile inner road course. Tickets are available on-site on the day of each race starting at $15 for adults and $10 for kids 12 and under.