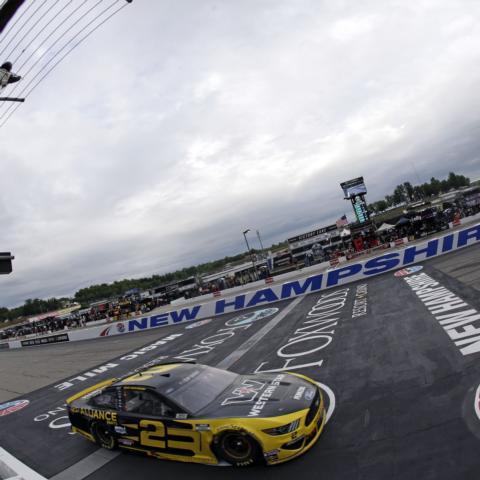 Brad Keselowski crossing the Granite Stripe at New Hampshire Motor Speedway as he took the checkered flag for the NASCAR Cup Series Foxwoods Resort Casino 301 on Aug. 2, 2020 for his second win at “The Magic Mile.” Harold Hinson Photography

Why is Sunday’s Foxwoods Resort Casino 301 at New Hampshire Motor Speedway (NHMS) such a big deal? For some it’s the Loudon the Lobster trophy presented to the winner in victory lane. For others, it’s a potential ticket to the NASCAR Cup Series Playoffs. But defending race winner Brad Keselowski said Sunday’s race could be a preview of the season finale at Phoenix Raceway, where the 2021 Cup Series champion will be crowned.

“I’ve got two of the big lobster trophies, with wins in 2014 and 2020 – and a lot of confidence, which is as important as anything else,” Keselowski said during a virtual media availability Tuesday. “We feel good about our cars. We feel good about the way I drive the track. Winning kind of breeds that confidence and in some ways creates momentum.

“Looking forward, the Phoenix race settles the championship in November, and Loudon, New Hampshire is the closest track we have to Phoenix remaining on the circuit. So when it comes to car development, team development, we look to this track to be a key indicator for how we will run for that race.”

With a win already under his belt this season, Keselowski is locked into the Playoffs. Gaining that crucial information for a potential championship run won’t come easy, however, as “The Magic Mile” creates a number of challenges, even for veterans like Keselowski.

“Loudon is a track that takes a lot of finesse to get around,” the 2012 Cup Series champion said. “You have to be really smooth with your inputs, take care of your car in some ways, but also know when to push it. We’ve got a lot of top-fives – only two wins – but I feel like we could have won there a half dozen times.”

Win or lose, Keselowski said he’s looking forward to getting back to New England and seeing fans back in the grandstands.

“There’s a lot of energy from the fans whenever we go,” he said. “Certainly, we were fortunate to have fans at the race last year, but I know it was a limited capacity. The midways and all the things we would do to activate were certainly nowhere near fully baked. I expect the atmosphere to be – what’s the word – lit. It’s going to be great.”

Action gets underway on Doubleheader Saturday, with NASCAR Whelen Modified Tour (NWMT) practice and qualifying, followed by the Whelen 100 NWMT race at 12:45 p.m. The Ambetter Get Vaccinated 200 NASCAR Xfinity Series is scheduled for 3 p.m. Sunday’s spotlight belongs to the NASCAR Cup Series drivers and the Foxwoods Resort Casino 301, which is scheduled to run at 3 p.m.