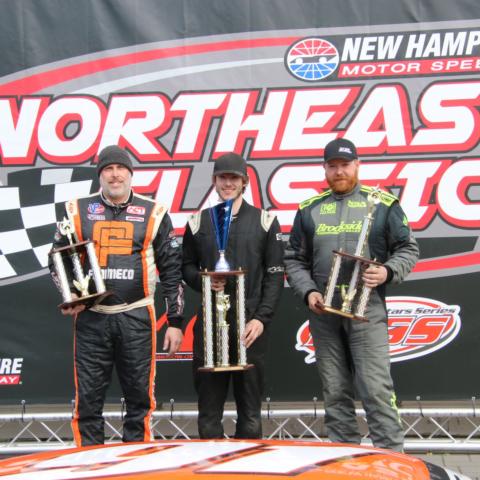 We couldn’t properly call it the Northeast Classic without Mother Nature staying true and changing the weather 987 times in a 72-hour span. We experienced it all – warm sunshine, blistering winds, downpouring rains, skies both clear and packed with clouds and even the occasional flurry of snow. Through it all, well over 100 different stock cars took to the 1.058-mile New Hampshire Motor Speedway (NHMS) for the 2nd Annual Northeast Classic with Derek Gluchaki taking the biggest win of his career in the 50-lap American-Canadian Tour (ACT) Late Model Tour season-opening event.

Unfortunate mechanical failures from early-season gremlins whittled a 38-car field that participated in Friday practice to a 32-car starting grid for Sunday’s Northeast Classic. Bolstered by Canadian teams returning stateside for the first time in two years, a strong contingent of new faces and a collection of old favorites, the ACT was ready to start off the 31st season of Late Model racing in the Northeast United States and Canada.

Case in point, when the field started off for warm-up laps, they were led by St-Edouard, Quebec’s Dany Trepanier, multi-time ACT winner Dillon Moltz and Jeffery Lebrecque Jr. from Strafford, N.H. From the initial green, it was the “5” show. Moltz in the RB Performance No. 5ME led the early goings with the No. 5MA of Tom Carey III hot on his heels.

On lap 13, Quebec City’s Alexandre Tardif got sideways coming out of turn two and slammed hard into the inside retaining wall on the backstretch, allowing the No. 91QC of Patrick Laperle, among others, to hit pit road for much needed adjustments. On the restart, Moltz chose the outside, which allowed Carey to take the lead on lap 14 using the inside line. The fives continued to stay in file across the speedway with the No. 7NH of former North East Mini Stock Tour (NEMST) champion Cody Leblanc stalling out in his rookie-year venture with ACT.

Following the lap 26 competition caution, “TC-3” continued to lead with Moltz stalking from behind, closely followed by D.J. Shaw and Jimmy Hebert in third and fourth. This foursome would pace the field with Gluchacki and local Late Model star Jamie Swallow Jr. jousting each other in and out of the top five. Given the 10-to-go signal from Chief Starter Jason Lamoy, Hebert became the first to step out and try a new line, nearly taking second from Moltz in turn two. Poised to work the bottom again in turns three and four, it all went up in smoke when Woody Pitkat and Raphael Lessard smashed into the turn four SAFER barrier, ending their day just nine laps early.

On the restart, Hebert again darted to the bottom under Carey just after the start/finish line before bombarding into turn one. Again, the move would be squandered by a yellow flag flying after the frontstretch spin by Derek Ming and a right front flat tire under the Shawn Swallow machine. A second restart proved disastrous when Hebert went spinning, sliding backward into the turn two wall, pinching 2021 Rookie of the Year Erick Sands with him while the avoidance-melee took several mid-packers including Jacob Burns, Remi Perreault, Jamie Swallow Sr. and Robby Gordon Douglas.

Following the red flag cleanup, Carey would lead Gluchacki, Moltz, Shaw and Swallow Jr. to the final restart of the race. Gluchacki launched beneath the Brookside Equipment No. 5MA, leading lap 44 while a three-wide blanket of yellow and orange followed in the fight for fourth with Laperle pushing past Swallow Jr. and Moltz to steal the position. Keeping his momentum, Laperle would lead over Shaw for third on lap 45 by just a grill cover. Carey would mount one final charge Gluchacki in the final two laps, but the No. 03MA prevailed.

The ACT Late Model Tour returns to its roots with the 24th annual Community Bank N.A. 150 at Thunder Road International Speedbowl in Barre, Vt. on Sunday, May 1. The ACT Late Models will also join the annual Thunder Road car show and practice day on Saturday, April 30 alongside the Lenny’s Show & Apparel Flying Tigers, rk Miles Street Stocks and Burnett Scrap Metals Road Warriors. Race day schedules, times and pricing information will be available soon on both ACTTour.com and ThunderRoadVT.com. The Community Bank N.A. 150 will also be available live online and around the world on FloRacing.

For more information about the American-Canadian Tour, contact the ACT offices at (802) 244-6963, [email protected] or visit ACTTour.com. You can also get updates on Facebook and Twitter at @ACTTour.