Fans Flock to The Flat Track 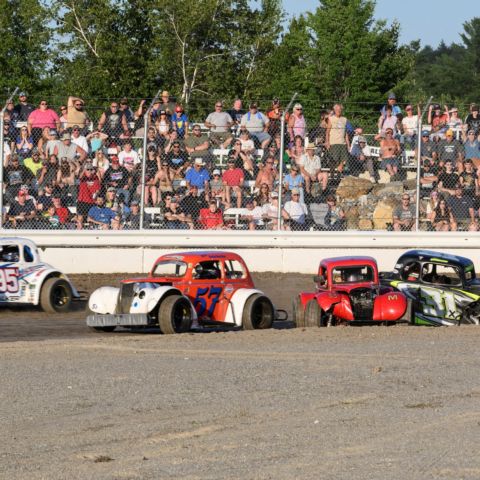 A packed house of race fans was on hand at The Flat Track as the Friday Night Dirt Duels Presented by New England Racing Fuel returned to New Hampshire Motor Speedway (NHMS) for the first time since 2019. The very best Sprint Cars of New England (SCoNE), U.S. Legend Cars International (USLCI) and Dirt Midget Association (DMA) drivers converged on the quarter-mile dirt track to drop the green flag on three consecutive days of action-packed racing as part of the Ambetter 301 race weekend at “The Magic Mile.”

In the SCoNE A-main, Jordan Fornwalt led the opening lap and never looked back, powering his 650-horsepower winged machine to the front of the field and racing to the win and a $3,000 pay day. Austin Bellemare crossed the stripe first in the 25-lap USLCI feature, while Josh Sun earned a hard-fought victory in the DMA showdown.

As the final checkered flag fell, it was the fans who were the ultimate winners with over 4,000 in attendance being treated not only to a trifecta of white-knuckled racing, but also a spectacular firework display and a raucous post-race concert with classic rock tribute band Shot of Poison.

Next up at “The Magic Mile” is Doubleheader Saturday, featuring the NASCAR Xfinity Series Crayon 200 at 2:30 p.m. followed by the Whelen Manufactured in America 100 NASCAR Whelen Modified Tour race at 6 p.m. The weekend comes to a rousing conclusion on Sunday with the NASCAR Cup Series Ambetter 301.