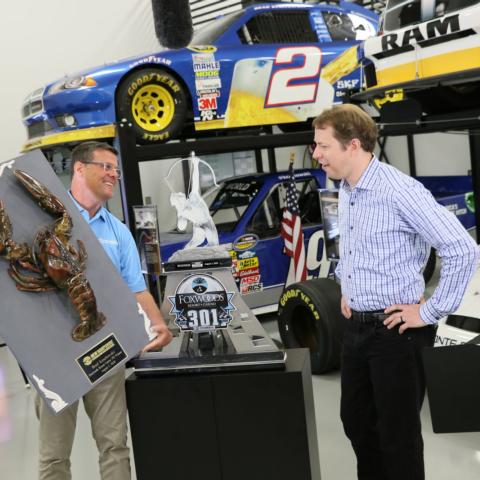 Keselowski’s victory lane celebration at “The Magic Mile,” which would traditionally include being presented with a giant live lobster, was limited due to COVID-19 restrictions last season.

“Last year, we were unable to properly celebrate with you after you earned your second New Hampshire Motor Speedway win,” McGrath said to Keselowski. “So here we are today to honor your dominant performance and present you with this Loudon the Lobster plaque as you get ready to return to New England next weekend to defend your title at the 50th NASCAR Cup Series race on July 18.”

“That’s cool,” said Keselowski. “It’s unique and part of why I love New England. The Foxwoods trophy and the lobster trophy are two of the coolest trophies, and I want to win them again.”

Joining McGrath on the trip to Keselowski Advanced Manufacturing in Statesville, N.C. was New England Comedian Jimmy Dunn, who helped Keselowski get ready for his return to New England. Fans should keep an eye on the speedway’s social media channels leading into race weekend for more fun form today’s visit.

Race weekend action gets underway on Doubleheader Saturday, July 17 with practice and qualifying sessions scheduled for the NASCAR Whelen Modified Tour (NWMT). The green flag drops for the Whelen 100 NWMT race at 12:45 p.m. followed by the Ambetter Get Vaccinated 200 NASCAR Xfinity Series race at 3 p.m. The NCS Foxwoods Resort Casino 301 will run at 3 p.m. Sunday, July 18.