Community Received More Than Just The Gift of Lights 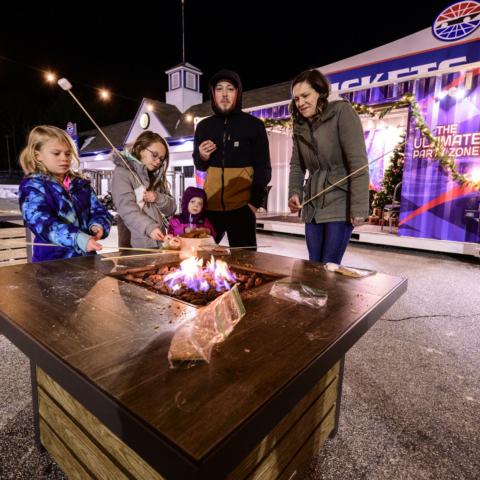 Two local nonprofits experienced true holiday spirit, each benefitting from the generosity of those who attended Gift of Lights at New Hampshire Motor Speedway (NHMS). The 11th annual event, which ran from Thanksgiving through Jan. 2, kicked off the year’s fundraising efforts for the New Hampshire Chapter of Speedway Children’s Charities (SCCNH) with more than $46,000 and provided more than 1,300 meals to the Loudon Food Pantry.

SCCNH, which raises money for children in need throughout New England, received a portion of each vehicle’s admission and s’more kit purchases for a total of $46,400, making this one of the largest SCCNH fundraisers annually. The funds raised will be combined with proceeds from other 2022 SCCNH events and be distributed through grants to local nonprofits in December. As the official charity of the speedway, SCCNH has raised more than $388,000 from Gift of Lights since 2011 and has distributed more than $1.9 million supporting more than 882,000 children throughout the region since 2009.

“We were thrilled to be able to bring the s’mores pit back to Gift of Lights this year,” said Danielle Cyr, director of the New Hampshire Chapter of Speedway Children’s Charities and marketing for New Hampshire Motor Speedway. “The community’s generosity, especially during the holiday season, is incredible and always kicks our year of fundraising off with a bang.”

Gift of Lights visitors received a discount on their admission when they brought at least three non-perishable food items to donate to the Loudon Food Pantry. These donations contributed to a total of 1,639.2 pounds of food, which will provide 1,366 meals.

“During these challenging times, I feel that giving out extra food is a necessity so that people can feel food secure,” said Sue Houck, president of the Loudon Food Pantry. “Thanks to Gift of Lights, we can continue this practice.”

Since Gift of Lights first started, food and monetary donations have allowed NHMS to donate over 100,000 pounds of food to the Loudon Food Pantry, which has provided more than 94,000 meals to locals during the holiday and winter months.

Gift of Lights, which has welcomed nearly 155,000 vehicles since 2011, is a 2.5-mile drive-thru light show that transforms NHMS into a twinkling winter wonderland with 3.5 million LED lights each holiday season.