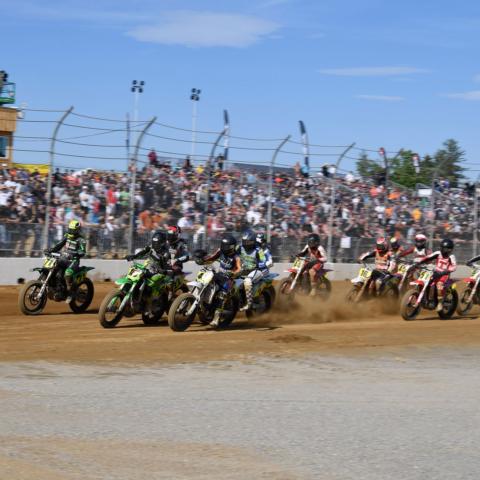 The 2022 Progressive American Flat Track season will go straight from the high-speed drafting wars of its first miles to the intense, bar-to-bar battles of its first short track with the Progressive Laconia Short Track presented by MOMS Motorsports at The Flat Track at New Hampshire Motor Speedway in Loudon, N.H. on Saturday, June 11.

The round will mark just the second occasion in which Progressive AFT has served as a premiere attraction of the fabled Laconia Motorcycle Week. The historic rally began as a gypsy tour in 1916 and is celebrating its 99th running this year with a huge number of motorcycle-themed activities featured all throughout the surrounding areas from June 11-19.

Jared Mees (No. 1 Indian Motorcycle/Progressive Insurance FTR750) enters the weekend as both the reigning Mission SuperTwins presented by S&S Cycle champion and its current points leader.

Mees was presented with a mighty challenge at the Red Mile and still ended up on the top of the podium. It’s not likely to get any easier at the mentally and physically demanding 0.25-mile Progressive Laconia Short Track. Mees could only muster 15th-place when the series visited back in 2019 due to mechanical issues, a result he has yet to do worse than ever since.

While he’ll be looking to make amends in his second opportunity at the venue, there will be no shortage of adversaries hoping to chip away at his early-season points lead. That group is headlined by two-time premier-class champion Briar Bauman (No. 3 Indian Motorcycle/Progressive Insurance FTR750), who is in need of a bounce-back effort following a relatively quiet weekend in Kentucky.

It’s safe to say no rider looks back as fondly on the ‘19 visit to New Hampshire as Bronson Bauman (No. 37 Latus Motors Racing Harley-Davidson XG750R), who took a hard-earned maiden victory on that occasion. Bauman has flashed the strength and speed to vie for top positions early in ‘22 and will do everything in his power to return Harley-Davidson to the top of the box this weekend.

Jesse Janisch (No. 33 Vance & Hines Harley-Davidson XG750R) has pulled off a successful career reinvention. Once regarded primarily as a TT specialist in singles competition, the Wisconsin native is now rightly viewed as a week-to-week threat and serious title fighter in the Mission Production Twins presented by Vance & Hines class.

Ever since getting the call by Vance & Hines to fill in as an injury sub during the middle of last season, Janisch has been on point. And that form has only continued to improve to the point where he enters the Progressive Laconia Short Track as the winner of two of the last three rounds and the new championship leader.

However, only one point separates him from defending class champion Cory Texter (No. 1 G&G Racing/Yamaha Racing Yamaha MT-07), who continues to salvage strong results on his bad days. One expects more good days are coming soon as Texter attempts to close out a decorated career by adding a third Mission Production Twins title to his name.

Several others still have the potential to have their say, both week-to-week and over the long haul, chief among Ben Lowe (No. 25 Mission Foods/Roof Systems Yamaha MT-07), Ryan Varnes (No. 68 Schaeffer’s Motorsports/Rausch Fuel & Oil KTM 890 Duke) and Johnny Lewis (No. 10 Moto Anatomy X Powered by Royal Enfield 650).

One other rider to watch out for this weekend is Dan Bromley (No. 62 Vinson Construction/Viper Air Yamaha MT-07), who finished third in the championship a year ago and finished as runner-up in his only outing to date this season.

The ‘22 Parts Unlimited AFT Singles presented by KICKER season is living up to its advance billing as a titanic showdown between the factory-backed KTM and American Honda outfits. Collectively, they’ve combined to score all five wins and 14 of a possible 15 podium positions.

As is the nature of the class, another dozen or so riders are more than capable of springing a surprise on any given weekend, led by the likes of Trent Lowe (No. 48 Mission Foods/Al Lamb’s Dallas Honda CRF450R), Trevor Brunner (No. 21 Estenson Racing Yamaha YZ450F), Chase Saathoff (No. 106 American Honda/Progressive Insurance CRF450R) and Chad Cose (No. 49 1st Impressions Race Team/Voodoo Ranger Honda CRF450R).

There will be plenty to keep fans entertained off the track as well, including numerous vendors, food trucks, beverage options, the Kids Zone and the live music of the acoustic rock duo D-Comp, featuring Demetri Papanicolau on vocals and Nate Comp on guitar.

Paddock Access Upgrades are also available for purchase, which provide all-day access to the pits where fans can scope out the world’s fastest dirt track motorcycles and get up close and personal with the stars of the sport.

Gates will open for fans at 12:30 p.m., practice will start at 1:30 p.m. and opening ceremonies are scheduled to begin at 4 p.m. ahead of the day’s main event program. You can catch the livestream of all the weekend’s racing activities on FansChoice.tv. FansChoice.tv provides free-to-view livestreaming of practice and qualifying. FansChoice.tv subscribers will then be able to watch the drama unfold from opening ceremonies through the semis, main events and podium celebrations. FansChoice.tv offers two subscription options, granting unlimited access to premium AFT content. Monthly subscriptions start at just $7.99, while a six-month subscription is available for $44.99.

The Progressive Laconia Short Track presented by MOMS will premiere on FS1 on Saturday, June 18 at 12 p.m. including exclusive features, cutting-edge aerial drone and onboard footage and expert commentary.

FOX Sports and FansChoice.tv are the official homes for coverage of Progressive American Flat Track. For the 2022 season, all races will premiere in one-hour telecasts on FS1 during highly desirable weekend time slots. The complete schedule can be viewed at https://www.americanflattrack.com/events-foxsports. FansChoice.tv provides livestreaming coverage of every Progressive AFT round at http://www.FansChoice.tv.