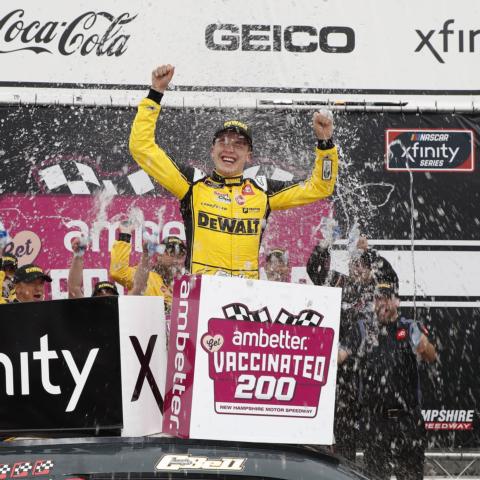 “New Hampshire Motor Speedway sure has been good to me; I like coming up here,” Bell said following a dominant performance that saw the 26-year-old lead 151 of 200 laps. “That last restart was really tough. I was taking off really loose. Justin (Allgaier) was able to stay right on my corner.”

With clean air and a wicked fast ride, Bell pulled away to win by 6.42 seconds over Allgaier to earn Toyota its 11th win in the last 13 NXS races at the 1.058-mile track. Daniel Hemric, Austin Cendric and Harrison Burton rounded out the top five.

Bell started 14th but powered his way to the front to grab the lead on lap 44 and never looked back.

The race was marked by five cautions, including a competition caution and stage breaks. Bell won all three stages en route to his 17th career victory in NASCAR’s penultimate series.

“I think these weekends with no practice and no qual – you’re not sitting in the car until the race, I think that gives us a real advantage,” he said. “It’ll be an advantage for whatever time period – two laps, five laps. By the end of the race, obviously, everyone’s up to speed, but hopefully it will let me get into the Loudon rhythm a little faster and we’ll see what happens. The last three times that I’ve been here have been amazing. Hopefully I can do it again tomorrow.”

Following the win, Bell sought out a fan wearing one of his t-shirts and gave him the checkered flag.

New England’s biggest event weekend of the summer continues with Sunday’s Foxwoods Resort Casino 301 when the NCS takes to “The Magic Mile.” Green flag is scheduled for 3:18 p.m.

Tickets:
Log on to NHMS.com for tickets, schedules and more information on Sunday’s Foxwoods Resort Casino 301. Tickets start at just $59 for adults and $10 for kids 12 and under.