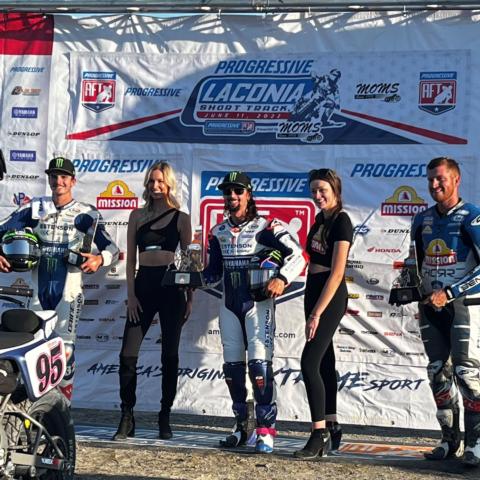 Faced with an extraordinarily technical surface, passing was at a premium on the day, making the start all that more important. Beach earned the top pick of starting positions with his performance in the lead-up to the Mission SuperTwins presented by S&S Cycle Main Event but appeared to throw that pivotal advantage away by slipping down to third in the race’s opening corner.

However, the versatile Beach somehow slashed past both Briar Bauman (No. 3 Indian Motorcycle/Progressive Insurance FTR750) and Jared Mees (No. 1 Indian Motorcycle/Progressive Insurance FTR750) in less than a quarter mile to reassert his dominance before it could ever be questioned. He was effectively perfect from that point forward, never providing another rider with any real hope of stealing away the victory.

While Yamaha had gone nearly a half-century between oval wins prior to the Mission Red Mile I triumph of Beach’s Estenson Yamaha teammate, Dallas Daniels (No. 32 Estenson Racing Yamaha MT-07 DT), it took just two weeks to add another.

The triumph also happened to be the first oval win of Beach’s Progressive AFT career to go along with his four prior TT victories. And as a result of today’s points haul, Beach now holds the early advantage in the recently announced Progressive Triple Crown.

He said, “I felt great. Thanks to the whole team – this track has been rough. It’s been a long day, but we squeaked out a win. It feels amazing to finally win on an oval. We’ve still got a lot of races to go, but I’m looking forward to it.”

Speaking of Daniels, the rookie might have been able to give Beach a run if not for a poor start that saw he and Mees shuffled back into an early scrap for sixth. Despite the general difficulties with overtaking at the venue, Daniels systematically made his way forward, ultimately charging all the way up to second at the checkered flag.

It was a rewarding 1-2 for Estenson Yamaha who backed up their Mile excellence with an even more convincing outing at a Short Track.

After being overtaken by Daniels, Jarod Vanderkooi (No. 20 Mission Roof Systems Indian FTR750) followed the rising star up the order. With less than two minutes remaining, he made his way past the aforementioned Bauman and ‘19 Laconia ST winner Bronson Bauman (No. 37 Latus Motors Racing Harley-Davidson XG750R) to claim the final spot on the box.

Bronson ultimately finished fourth with Briar fifth after the Baumans waged a brother-vs-brother duel for the runner-up spot for more than half the contest.

Reigning champion Mees never did find his typical front-running form, ultimately coming home in sixth position. Despite suffering his worst finish of the season, Mees continues to lead the title fight. However, Daniels is now just 15 points back (122-107) while Briar and Beach remain significant factors as well with 100 and 98 points, respectively.

Also notable is Sammy Halbert (No. 69 Mission Roof Systems Indian FTR750), who made his return to racing following his terrifying crash and subsequent injury at last year’s Charlotte Half-Mile. Halbert ran as high as fourth early before eventually fading back to eleventh.

For just over six minutes, the race seemed all but certain to go to championship leader Jesse Janisch (No. 33 Vance & Hines Harley-Davidson XG750R), a one-time TT ace added Half-Mile and Mile victories to his résumé in recent weeks.

However, the combination of a couple small mistakes on an unforgiving track and heavy traffic saw Janisch’s hard-earned gap eaten away, allowing the 17-year-old Ross to close back to within striking distance just as they approached the final two laps. Ross proceeded to pounce when Janisch made a minor miscue with just over a lap to go and then successfully defended the position to the checkered flag.

The victory wasn’t just the first of Ross’ young career, it was his first Mission Production Twins result better than tenth and the first top-five of his pro career full stop.

“I can’t even take it all in yet,” Ross said. “I feel like it’s been coming for a couple races now, but I’m just glad it happened here. I almost settled in behind Jesse, but then he made a little bobble and I was like, ‘Okay, I’ve got to take advantage.’ It was a fun race.”

A few seconds back, the "partially-retired" Dan Bromley (No. 62 Vinson Construction/Viper Air Yamaha MT-07) showed he’s still got his chops with a strong ride to third. As a result, Bromley stands two-for-two in podiums per attempt this year following his runner-up at the season opener in Volusia.

Cory Texter (No. 1 G&G Racing/Yamaha Racing Yamaha MT-07) once again salvaged a decent result out of a less-than-perfect round. The defending class champ executed successive passes on sixth-placed Cole Zabala (No. 51 Memphis Shades/Corbin/Vinson Yamaha MT-07) and fifth-placed Johnny Lewis (No. 10 Moto Anatomy X Powered by Royal Enfield 650) to minimize the day’s damage with a fourth-place finish.

Meanwhile, it was a second consecutive tough outing for former points leader Nick Armstrong (No. 60 Competitive Racing Frames/Lessley Brothers Yamaha MT-07), who ended up 13th. As a result, Janisch has expanded his points lead from one to six (112-106) over Texter, while Armstrong now sits a distant third at 87.

Parts Unlimited AFT Singles presented by KICKER title leader Kody Kopp (No. 12 Red Bull KTM Factory Racing 450 SX-FFE) was in a class of his own all day long at The Flat Track at New Hampshire Motor Speedway.

The prodigious Kopp was fastest in every practice and qualifying session, won his Semi and the Al Lamb's Dallas Honda Challenge going away, and then stamped his authority through multiple starts and stops in a three-time red-flagged Main Event.

The field was gifted a pair of late Hail Marys, first when the charging Gage Smith (No. 113 BigR Racing/L&R Racing Honda CRF450R) crashed with a minute-and-a-half remaining on the clock, and then again when Michael Inderbitzin (No. 54 1st Impressions Services of Florida Honda CRF450R) had an incident shortly after the restart.

While the red flags deleted Kopp’s six-second advantage, they may have actually done him a favor by clearing out the possibility of encountering trouble in traffic in his final sprint to the flag.

The victory was Kopp’s third of ‘22. That, combined with an eighth on the part of title rival Morgen Mischler (No. 13 American Honda/Progressive Insurance CRF450R), and the DNS of the injured Max Whale (No. 18 Red Bull KTM Factory Racing 450 SX-FFE), allowed Kopp to rip his championship advantage open to 18 points over Mischler, and 41 over teammate Whale.

Despite his strong championship position, the 17-year-old Kopp remains focused on the here and now. He said, “It’s too early to think about that. We’re just playing it race-by-race. I can’t believe the opportunity this team has given me. It’s been so great for myself and my family.”

It was an impressive performance for both riders with Lowe securing his second podium in the most recent three races. Saathoff, meanwhile, earned his first-career Progressive AFT podium in third despite having to start from the back of the field after forcing the race’s first red flag.

The Progressive Laconia Short Track presented by MOMS will premiere on FS1 on Saturday, June 18, at 12 p.m. ET/9 a.m, PT, including exclusive features, cutting-edge aerial drone and onboard footage, and expert commentary.

You can catch the livestream of all the weekend’s racing activities on FansChoice.tv. FansChoice.tv provides free-to-view livestreaming of Practice and Qualifying. FansChoice.tv subscribers will then be able to watch the drama unfold from Opening Ceremonies through the Semis, Main Events, and podium celebrations. FansChoice.tv offers two subscription options, granting unlimited access to premium AFT content. Monthly subscriptions start at just $7.99, while a six-month subscription is available for $44.99.

To score the latest gear for the Progressive American Flat Track fan, visit our official merchandise store at https://store.americanflattrack.com.

FOX Sports and FansChoice.tv are the official homes for coverage of Progressive American Flat Track. For the 2022 season, all races will premiere in one-hour telecasts on FS1 during highly desirable weekend time slots. The complete schedule can be viewed at https://www.americanflattrack.com/events-foxsports. FansChoice.tv provides livestreaming coverage of every Progressive AFT round at http://www.FansChoice.tv.