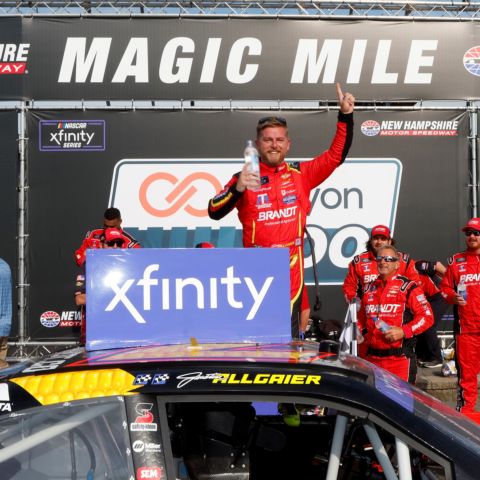 It was a tale of two halves at the Crayon 200 at New Hampshire Motor Speedway (NHMS) to kick off Doubleheader Saturday at “The Magic Mile.” Ultimately, JR Motorsports’ Justin Allgaier survived a wild afternoon of NASCAR Xfinity Series (NXS) action to claim his third victory in the last eight races and his first ever at NHMS.

Early in the race, it appeared that Joe Gibbs Racing, which had won six consecutive NXS races at NHMS, was destined to continue its recent dominance as hot shoe Ty Gibbs blistered the pavement to pace the field in his No. 54 Toyota Supra for much of the opening two stages. But an equipment failure at the end of stage two relegated Gibbs to a 23rd place finish.

The second 100 laps were marred by six cautions for 38 laps, bunching up the field and opening the door for a number of other drivers, including Allgaier, Landon Cassill and Josh Berry to battle for the lead. In the closing laps, Allgaier proved he had the car to beat, leading 47 of the final 49 circuits to claim the checkered flag ahead of Trevor Bayne and Cassill.

“We finished second last year, and I told the guys this week I wanted to win,” Allgaier said. “I just felt like all day I wasn’t doing a good job. It takes a team, and the guys kept me calm and gave me good pit stops.”

The win was not only Allgaier’s first visit to victory lane at NHMS, but the first for team owner Dale Earnhardt Jr.

“I’ve never been in that victory lane before in my life, and so, it’s pretty cool,” Earnhardt said. “It was a crazy up and down race. One minute your heart is in the gutter, and then at the end of the race, you’re as happy as you can possibly be at a racetrack. It’s a rollercoaster for sure.”

For Trevor Bayne, the runner-up finish marked just his sixth start in the series this season. Despite the part-time schedule, Bayne felt he had a car capable of winning at the 1.058-mile NHMS.

“This is the second time I’ve run second to him in two races,” Bayne said. “On the restarts, it was chaos – people missing shifts and putting you four-wide. If we could get there, I felt like we had a chance. It used to be ‘second is a great day,’ but we’ve been knocking on the door so much, we just want a win.”

During pre-race, Crayon CEO Justin Henriksen announced Crayon will be the entitlement sponsor for next season’s NASCAR Cup Series (NCS) race, the Crayon 301, at “The Magic Mile.”

Tickets:
Sunday’s Ambetter 301 tickets start at just $59 for adults and $10 for kids 12 and under. Fans can log on to NHMS.com for tickets and more information on this weekend’s lineup of action-packed racing. Walk-up tickets are available at all ticket booths.