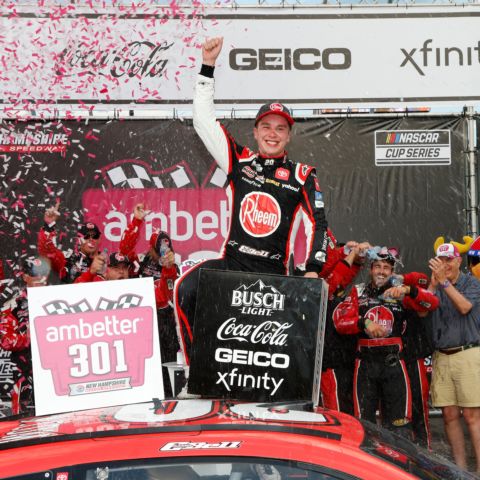 Perhaps the only thing that could stop Christopher Bell from winning Sunday’s Ambetter 301 at New Hampshire Motor Speedway (NHMS) was Loudon the Lobster in victory lane. At the end of the day, the Joe Gibbs Racing driver overcame not only his anxiety over the clawed crustacean, but also some stiff competition on the track to power his Toyota Camry TRD to the first oval win of his young career.

After a dominant early performance by teammate Martin Truex Jr., who led a race-high 172 laps and swept the first two stages, Bell paced the field for the final 42 circuits en route to the win.

“Winning Cup races is hard,” Bell admitted following the race. “It just seems like we’ve been so close. Earlier in the year I felt like we were right on the cusp of winning, but the last few weeks we haven’t been close. Now here we are… That one was much-needed.”

When the checkered flag flew, Bell beat runner-up Chase Elliott to the line by 5.676 seconds.

With a third-place run, 23XI Racing’s Bubba Wallace turned in his best performance of the season since finishing second at the Daytona 500.

“It didn’t handle that great, but it had speed,” Wallace said of his No. 23 Toyota Camry TRD. “I’m glad it came out the way it did. This sport humbles you, so there are no surprises. You just have to stick true to your path.”

With the win, Bell continued his hot streak at NHMS, where he finished second last season and has earned three wins in the NASCAR Xfinity Series. The 27-year-old Oklahoma native also likely cemented his spot in the NASCAR Playoffs. The 14th different winner through 20 races is the most at NASCAR’s premier level since 2011.

Tickets:
Fans can renew their tickets for the 2023 NASCAR Cup Series (NCS) race, the Crayon 301, at NHMS.com. The official 2023 NCS schedule including the Crayon 301 will be released later this year.