Top Five: Storylines to Watch as NASCAR’s Best Prepare for the Ambetter 301 Weekend 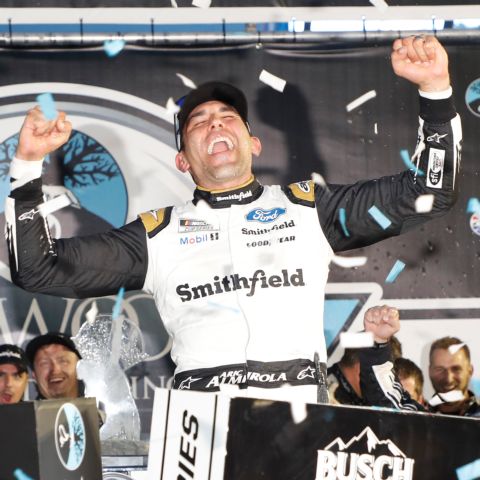 Aric Almirola’s 2021 win at New Hampshire Motor Speedway secured him a spot in the 2021 NASCAR Playoffs. With 13 winners already locked in leaving only three spots in this year’s Playoffs up for grabs, a win at this Sunday’s Ambetter 301 NASCAR Cup Series race is critical. Harold Hinson Photography

Fans headed to New Hampshire Motor Speedway (NHMS) for the Ambetter 301 NASCAR weekend are in for a wicked good time at “The Magic Mile” as drivers take to the track for three full days of action-packed racing this Friday through Sunday, July 15-17. From the return of Friday Night Dirt Duels Presented by New England Racing Fuel at The Flat Track to NASCAR’s NextGen car making its long-awaited New England debut on Sunday, there will be no shortage of thrilling, white-knuckled excitement for fans to enjoy. Here are five must-watch storylines headed into the weekend:

Only seven active NASCAR Cup Series (NCS) drivers have won at NHMS – Aric Almirola, Kurt Busch, Kyle Busch, Denny Hamlin, Kevin Harvick, Brad Keselowski and Joey Logano. Through the first 19 NCS events this season, 13 different drivers have won points races. While Harvick, Keselowski and Almirola have each had recent success at “The Magic Mile,” having won in 2019, 2020 and 2021, respectively, all three are still winless in 2022, and given the parity in the current NASCAR Playoff picture, a win might be their best chance to race for a championship.

With seven regular season events remaining to set the 16-car Playoff field, drivers on and around the cutline are looking to secure their spot with a strong showing at NHMS this weekend. Among the drivers on the bubble, Harvick might be the odds-on favorite to take the checkered flag. His four wins at Loudon tie him with Jeff Burton for the most all-time. While the 58-time NCS winner hasn’t been to victory lane since September 2020, history shows he’s always a strong contender at NHMS. A win at the Ambetter 301 would not only rewrite the NHMS record books, but would also help bolster a potential Playoff run for the 2014 champion.

Given how the NextGen car has seemingly leveled the playing field and produced a bevy of first-time winners already this season – Austin Cindric, Chase Briscoe, Ross Chastain, Daniel Suarez and Tyler Reddick – it seems that almost anything is possible when the green flag falls. Notable drivers who earned their first NCS victory at the 1.058-mile Loudon track include Joe Nemechek, Robby Gordon, Ryan Newman, Clint Bowyer and Joey Logano. Could a veteran driver like Corey LaJoie or Ty Dillon finally find his way to victory lane? Or will a future star of the sport like Harrison Burton or Todd Gilliland earn a career-defining first NCS win? Time will tell, but with a history of producing first-time winners, fans certainly shouldn’t count any of them out.

This weekend’s Ambetter 301 marks the 51st NCS event at the famed New England track, so it’s certainly a familiar stop for veteran drivers at NASCAR’s highest level. But if homefield advantage counts for anything, Connecticut native Joey Logano and his No. 22 Team Penske machine will be one to watch in the closing laps on Sunday. In 23 career starts, Logano has finished in the top five eight times (34.5 percent of the events), including wins in 2009 and 2014. With wins already this season at The Clash at the L.A. Coliseum, Darlington Raceway and World Wide Technology Raceway, he has proven he has the car to beat.

But Logano isn’t the only New England native strapping into the driver’s seat this weekend. In Saturday’s Crayon 200 NASCAR Xfinity Series (NXS) race, Derek Griffith of Hudson, N.H. will make just his third career start in NASCAR’s penultimate series. In the second half of Doubleheader Saturday, hot shoe Ryan Preece – the 2013 NASCAR Whelen Modified Tour champion and a two-time winner in both the NXS and Camping World Truck Series – is expected to be among the crowded field of New Englanders vying for a win in the Whelen Manufactured in America 100.

Primed for Her Debut

Julia Landauer is scheduled to make her NXS debut at Saturday’s Crayon 200, driving for Alpha Prime Racing and adding another chapter to her racing legacy.

Originally from New York, N.Y., the now 30-year-old racer and motivational speaker started her racing career as the first and youngest female champion in the Skip Barber Racing Series when she was only 14 years old. She made history as the first women ever to lead a lap in the NASCAR Pinty’s Series, and more recently secured the highest-ever finish for an American racer in the NASCAR Euro Series with a fifth-place finish in 2020.

As the summer temperatures heat up, so too does the action on the track, with drivers battling feverishly for crucial Playoff points and a shot at a Cup Series title. In recent weeks, Ross Chastain has found himself on the wrong side of controversy after battling against fellow Playoff contender Denny Hamlin, among others. After tussling on the track at St. Louis, the two came together again during Sunday’s high-speed showdown at Atlanta. Following the race, Hamlin said he had reached his peak with the Trackhouse Racing driver. Both drivers have two wins on the season, which locks them into the Playoffs, but if there are any scores to settle, it could come as early as Sunday’s Ambetter 301.