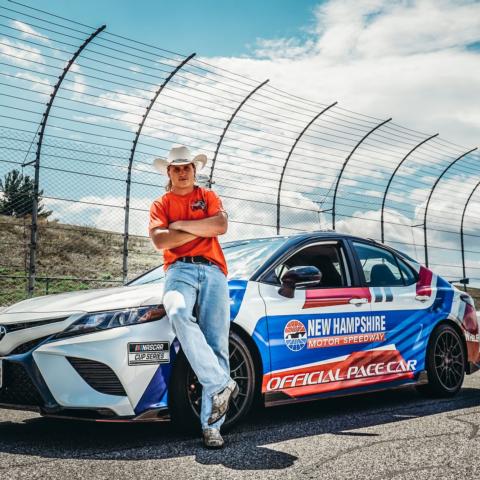 On Sunday, July 18, Gunner Olszewski, all-pro punt returner and wide receiver for the New England Patriots, will trade the pigskin for the keys to the official Toyota Camry TRD pace car as he leads 40 of NASCAR’s best to the green flag for the Foxwoods Resort Casino 301 – the 50th NASCAR Cup Series (NCS) race at New Hampshire Motor Speedway (NHMS).

“This is a dream come true,” said 24-year-old Olszewski. “My brother and I grew up watching NASCAR with our dad, and I’m still a huge fan today. I can’t believe I get to lead the field to the green flag at ‘The Magic Mile!’”

Born in Alvin, Texas, six-foot Olszewski will enter his third season with the New England Patriots this year. On Dec. 6, 2020, Olszewski scored his first NFL touchdown on a 70-yard punt return against the Chargers, which was the first punt return for a touchdown for New England since wide receiver Julian Edelman, who drove the official Toyota Camry pace car at NHMS in July 2014, returned a punt 84 yards vs. Denver on Nov. 2, 2014. Olszewski is the first player in Patriots history with two punt returns of at least 60 yards in a single game and the first NFL player to do so since Dec. 22, 2019. He finished the game with 145 punt return yards, the second-most ever in a single game by a Patriots player. He also hauled his first touchdown catch on a career-long 38-yard reception, added special teams tackles and was named the AFC Special Teams Player of the Week.

On Jan. 3, 2021, Olszewski returned three punts for 36 yards against the Jets. In doing so, he finished first in the NFL with a 17.3-yard punt return average, the highest in Patriots history, passing Edelman’s previous record of 15.5 set in 2012.

“Gunner has proven himself on the gridiron and now is his chance to show New England race fans what he’s got,” said David McGrath, executive vice president and general manager for New Hampshire Motor Speedway. “We’re excited to welcome him to ‘The Magic Mile’ and put him behind the wheel of the official Toyota Camry TRD pace car.”

Race weekend action gets underway on Doubleheader Saturday, July 17 with practice and qualifying sessions scheduled for the NASCAR Whelen Modified Tour (NWMT). The green flag drops for the Whelen 100 NWMT race at 12:45 p.m. followed by the Ambetter Get Vaccinated 200 NASCAR Xfinity Series race at 3 p.m. The NCS Foxwoods Resort Casino 301 will run at 3 p.m. Sunday, July 18, marking the 50th NCS race at “The Magic Mile.”