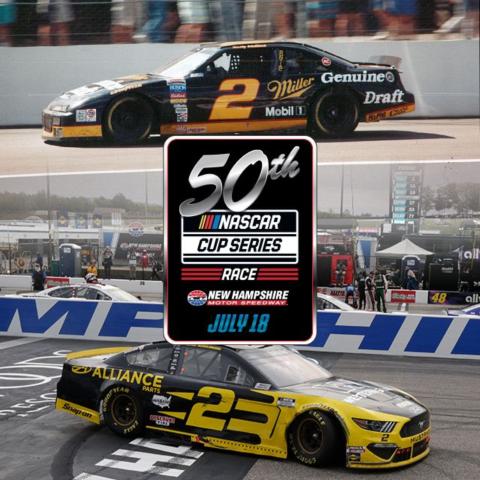 The July 18 Foxwoods Resort Casino 301 at New Hampshire Motor Speedway (NHMS) will mark the 50th time the track will host the NASCAR Cup Series (NCS) for an event at the 1.058-mile oval.

Twenty-four different drivers have won Cup Series events at NHMS over the first 49 events at the track dating back to July 1993. Let’s take a look at 10 of the most memorable moments through the years:

In the early 1990s, the NASCAR Cup Series was beginning to take hold as the most popular form of motorsports in the country, but missing from the series schedule was a visit to New England. In walked legendary New England track owner Bob Bahre, who had transformed the former Bryar Motorsports Park in Loudon, N.H. to one of the country’s newest major speedways. The 1.058-mile oval, then known as New Hampshire International Speedway, hosted its first Cup Series event on July 11, 1993, and one of NASCAR’s biggest names was standing in victory lane at the end of the day as Rusty Wallace celebrated victory in the inaugural Slick 50 300.

By 1995, NASCAR’s meteoric rise was in fast forward mode, and it was a young driver from California by way of the sprint car ranks who was capturing the attention of everyone across motorsports. The legend of Jeff Gordon was taking shape that year, and New England fans got a firsthand glimpse of it in victory lane as Gordon won the Slick 50 300. It was the seventh Cup Series victory in Gordon’s Hall of Fame career, which saw him win 93 events overall. He would go on to win seven races in 1995 and capture the first of four Cup Series championships. Gordon would shine in Loudon over his career, and to this day, hold tracks records for Cup Series starts (42), top-five finishes (16), top-10 finishes (24), laps led (1,373) and laps completed (12,267).

With 12 wins from 1990-1994, Ernie Irvan was a star on the rise in the Cup Series, and in August 1994, he was in a fierce battle with Dale Earnhardt Sr. for the Cup Series championship. But his career – and life – were nearly cut short in a gruesome crash at Michigan International Speedway. Irvan suffered a traumatic brain injury in the crash, and doctors did not expect him to survive. He returned to racing full-time in 1996, and on July 14 of that year, his comeback was completed when he held off his Robert Yates Racing teammate Dale Jarrett to win the Jiffy Lube 300 at Loudon.

Joe Nemechek was considered a journeyman racer, but hardly a threat to win in the Cup Series when he arrived in Loudon in September 1999. Before that weekend, Nemechek had made 179 starts in the Cup Series with only three top-five finishes. But everything changed on Sept. 19, 1999 when Nemechek led 72 of 300 laps to get his first career Cup Series victory in the Dura Lube/Kmart 300 at Loudon. Nemechek became the first of five drivers since 1993 to record their first Cup Series win at New Hampshire Motor Speedway.

New Hampshire Motor Speedway has plenty of special meaning for Jeff Burton. The first Cup Series event at Loudon in 1993 was also his first event with the series. Burton found plenty of success at the track over his career, but was never more dominating than on Sept. 17, 2000 in the Dura Lube 300. Burton took the lead from the pole winner Bobby Labonte on the first lap and went on to lead all 300 laps for his record-setting fourth Cup Series victory at New Hampshire Motor Speedway. It marked only the third time in NASCAR’s modern era that a driver led every lap in an event. Cale Yarborough had accomplished the feat in 1973 and 1978. No driver has done it since Burton at Loudon in 2000. Burton’s four Cup Series victories at Loudon has only been matched by Kevin Harvick.

The Sept. 11 terrorist attacks in 2001 forced NASCAR to postpone the New Hampshire 300, which had been scheduled to take place on Sept. 16 of that year. The event was pushed back to become the final event of the Cup Series schedule that season and was run the day after Thanksgiving. Teams and drivers were welcomed to the track by freezing temperatures on the morning of the race, but ultimately were treated to a beautiful fall day at the facility that saw Robby Gordon lead 17 laps to earn his first career Cup Series victory, becoming the second driver to accomplish that feat at Loudon. Jeff Gordon had a 15th place finish that day to clinch his fourth Cup Series championship.

By the 2000 season, Jeff Gordon and Tony Stewart had paved the way for midwestern-based sprint car drivers to find a home in the Cup Series, and it was Ryan Newman who used that similar path to find his way to NASCAR. Newman arrived in the Cup Series with high expectations but went winless through his first 34 starts. His breakthrough came on Sept. 15, 2002 when he scored his first Cup Series win in the rain-shortened New Hampshire 300. Newman, who remains active in the series, has gone on to 17 more Cup Series wins.

Clint Bowyer was quickly becoming a fan-favorite in the Cup Series when he arrived at New Hampshire Motor Speedway for the Sylvania 300 in September 2007, but the then Richard Childress Racing driver was still searching for consistent success in his second full-time season with the series. Coming into the Sylvania 300 that year, Bowyer had just seven top-five finishes in Cup races over his first 63 starts. At New Hampshire Motor Speedway on Sept. 16, 2007, he showed he knew how to dominate an event, leading 222 of 300 laps that day to record his first Cup Series win, becoming the fourth driver in series history to accomplish that feat at Loudon.

The racing world had high expectations for Middletown, Conn. native Joey Logano, who replaced Tony Stewart in the Joe Gibbs Racing No. 20 car for the 2009 season, but Logano was struggling through his rookie year by the time he arrived at Loudon for the June 28, 2009 Lenox Industrial Tools 301. Ultimately, Logano would find a way to win in one of the strangest fashions ever seen in a Cup Series event at New Hampshire Motor Speedway. Logano ran far from the leaders for most of the race, and his own wreck brought out a caution on lap 191 of the event. The crash put him off pit sequence with the rest of the field and with most of the top-running cars pitting, Logano cycled through to grab the race lead on lap 264. Rain began falling not long after, and the caution flew on lap 268 with Logano out front. After running to lap 273 under caution, the race was stopped, making Logano the fifth driver in Cup Series history to get his first series win at New Hampshire Motor Speedway. Logano has since gone on to 27 more series wins – including the 2015 Daytona 500 – and was the 2018 Cup Series champion for Team Penske.

In one of the most dramatic finishes to a Cup Series event at Loudon, Kevin Harvick and Denny Hamlin put on a full-contact duel over the final lap. Harvick led at the white flag with Hamlin bumping him up the track in turn one. The pair went side-by-side through turn two with Harvick edging out front down the backstretch. Hamlin went to Harvick’s outside in turn three, and the pair made contact again through the final turn with Harvick winning the drag race to the checkered flag for victory at the Foxwoods Resort Casino 301. After the race, Harvick said, “We were leaving on a tow truck or winning today.” It was Harvick’s fourth Cup Series victory at Loudon, matching him with Jeff Burton for the track record.