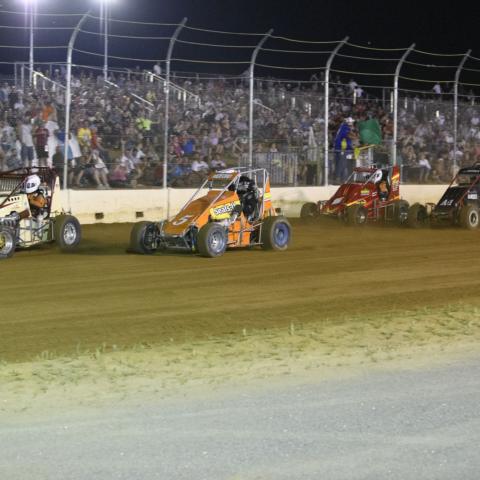 Dirt Midget Association
Separated by only nine points, Seth Carlson, Josh Sunn and Justin Sheriden are locked in a tight championship battle for the DMA’s points lead heading into the weekend’s white-knuckled showdown at The Flat Track, but with no points on the line, it’s all about the checkered flag. Carlson took the win in 2019, and this Saturday, after a three-year absence from the New Hampshire dirt track, the field will be racing for a piece of the $7,250 purse, including the $1,500 payout to the winner.

Sprint Cars of New England
The 360-winged sprint cars of SCoNE will make their debut at The Flat Track at NHMS this Saturday. Defending series champion and Barnstead, N.H. native Clay Dow hopes to carry his momentum from the first few races to the track not far from his home. With one win and a third-place finish already this season, Dow sits atop the point standings tied with six-time series champion Chris Donnelly, who’s already earned two runner-up finishes this season. Series young guns Jake Williams (Center Tuftonboro, N.H.), Matt Hoyt (Campton, N.H.) and Caleb Lamson (Moretown, Vt.) are all SCoNE winners and want to add the Musket Dirt Shootout trophy to their collection. As the laps wind down and drivers scrap for the $1,500 top prize, don’t count out 14-year-old Kadyn Berry of Goffstown, N.H.

Granite State Mini Sprints
Since 1984, the members of GSMS have competed with cars utilizing motorcycle engines and drive components. This family-oriented club with drivers starting at age 12 is one of the next steps in racing for kids coming from go-kart and quarter-midget divisions. This Saturday, fans will see family members racing side-by-side in two classes – 400/500cc and 600cc – of mini sprints. Current points leaders in each division are Josh Wright (400/500cc) with an eight-point lead and Justin Burr (600cc) with a six-point lead.

The Flat Track was resurfaced earlier this year with 2,000 yards of clay from Orwell, Vt., the corners were widened to 50 feet and improvements were made to the catchfence. The all-new beer garden viewing area will be open for fans to enjoy as well as concessions and kids activities. About 300 more permanent seats have been added between turns three and four; however, race fans are still encouraged to bring lawn chairs and blankets for seating.

Tickets:
Log on to NHMS.com for tickets and more information. Musket Dirt Shootout tickets start at just $20 for adults and $10 for kids 12 and under.