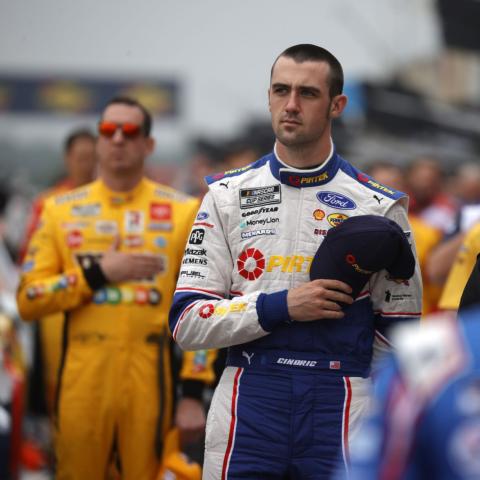 Austin Cindric prior to racing in the inaugural NASCAR Cup Series EchoPark Automotive Texas Grand Prix at Circuit of The Americas in Austin, Texas on May 23, 2021. Getty Images

As the reigning NASCAR Xfinity Series (NXS) champion and NXS points leader since the first race of 2021, Austin Cindric couldn’t be in a better position to repeat as series champ come November. But one place where the Team Penske driver is still in search of some magic is “The Magic Mile,” where Cindric and the rest of the NXS will compete in the Ambetter Get Vaccinated 200 on Saturday, July 17.

In two NXS starts at New Hampshire Motor Speedway (NHMS), Cindric has finished 17th and 12th respectively. The 22-year-old hasn’t exactly set the woods on fire at the 1.058-mile track, but he was headed for a strong finish in the July 2018 NXS race before it all went south on the final lap when he made contact with the wall and lost multiple positions coming to the checkered flag.

“We were set to finish in the top five, and then we sped on pit road, had to come back through the field and did so, but just got tangled up in the last lap, the last corner and tore up a lot of stuff,” Cindric said.

After sharing time between Team Penske and Roush Fenway Racing (RFR) that season (he drove for RFR at NHMS), Cindric joined Penske full time in 2019 – and it’s fair to say he’s never looked back. Over a little more than two-and-a-half seasons as a full-time Penske driver, he’s earned a dozen wins and established himself as the driver to beat week in and week out, and, despite his lack of success so far at NHMS, he’ll likely be the driver to beat this year. Cindric, however, has a different take on where he stands in the series’ pecking order.

“I don’t think there are any clear favorites,” he said. “I think any given week, you can’t really predict the top five, so, to me, that means there’s a lot of parity in this series and a lot of great drivers fighting for a lot. So that’s made racing on Saturdays a lot of fun and definitely maybe a different challenge than in year’s past.”

Cindric, who is set to go full-time NASCAR Cup Series (NCS) racing with Team Penske in 2022, has some unfinished business before graduating from the NXS. Not only does he covet a win and a change in fortunes at New Hampshire, he’s also determined to go out in style with a second consecutive championship. A strong run this weekend will aid that effort.

“It is all about getting to the Championship 4, and once you get there, you have to have your best day,” Cindric said. “But you can’t do that unless you get there. That is my mentality. I am not saying that we don’t have a lot of momentum as a team. We are obviously doing a lot of great things. That is great, but we can’t slow down. Everyone else will keep getting better as well, so there is no resting.”

Race weekend action gets underway on Doubleheader Saturday, July 17 with practice and qualifying sessions scheduled for the NASCAR Whelen Modified Tour (NWMT). The green flag drops for the Whelen 100 NWMT race at 12:45 p.m. followed by the Ambetter Get Vaccinated 200 NXS race at 3 p.m. The NCS Foxwoods Resort Casino 301 will run at 3 p.m. Sunday, July 18, marking the 50th NCS race at “The Magic Mile.”

Keep track of all of New Hampshire Motor Speedway’s events by following on Facebook (@NHMotorSpeedway), Twitter (@NHMS) and Instagram (@NHMS). Keep up with all the latest information on the speedway website (NHMS.com) and mobile app.